SEOUL, Dec. 8 (Yonhap) -- Hyundai Motor Co., South Korea's biggest carmaker by sales, said Tuesday it suspended the truck assembly line of its local plant as seven workers at the plant were confirmed to have been infected with the new coronavirus.

"The truck assembly line of the Jeonju plant has been suspended from Monday. The company will decide on whether to restart the operation of the truck line on Wednesday depending on test results of the 2,000 employees," a company spokesman said over the phone.

The plant's bus assembly line is in normal operation, he said.

The infections brought the total number of COVID-19 cases at the Jeonju plant to 14. Hyundai mainly produces buses and trucks in Jeonju.

The maker of the Sonata sedan and the Palisade SUV suspended the production lines of its domestic plants this year to manage inventories amid the virus crisis. 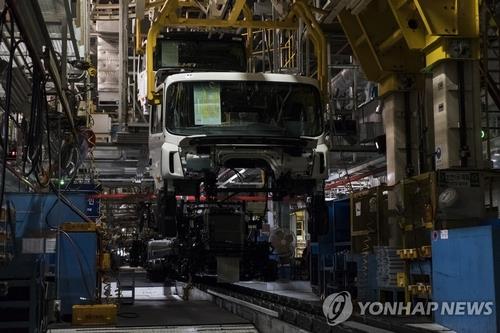