SEOUL, Dec. 8 (Yonhap) -- A Seoul court has slapped a fine on a progressive politician accused of staging a protest to smear a rival candidate in the run-up to the April parliamentary elections.

The Seoul Central District Court sentenced the 29-year-old woman to a fine of 800,000 won (US$737) on charges of violating the Public Official Election Act, according to judicial sources on Tuesday.

Running for the parliamentary seat for district B of Seoul's Dongjak ward on the ticket of the minor Minjung Party, the defendant was indicted on charges of illegally denouncing conservative rival candidate Na Kyung-won, who was running for reelection in the constituency.

The defendant allegedly staged a protest with her supporters in front of Na's office in March, holding banners and making remarks in denouncement of the rival candidate.

The Public Official Election Act prohibits the installation of advertisement materials that could affect an election, starting 180 days before election day.

Both lost the election, giving way to Rep. Lee Su-jin of the ruling Democratic Party. The Minjung Party, meanwhile, was recently renamed the Jinbo Party.

The court said the defendant hampered fair election management by directly committing the crime as an election candidate. 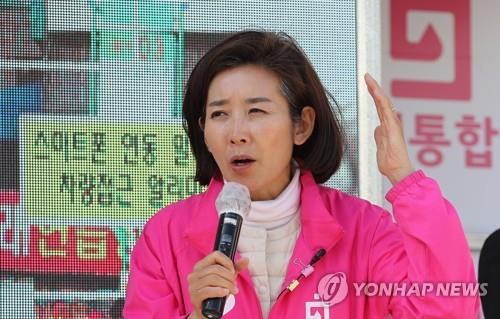 Politician fined for smearing rival ahead of parliamentary elections

Politician fined for smearing rival ahead of parliamentary elections