Lee made the remarks during an interview with local radio broadcaster CBS, saying the North is likely to focus on its antivirus campaign until next month before reaching out to South Korea for cooperation in the field of public health.

"I am certain North Korea has checked our intention and I expect that there could be a possibility (of communication and exchanges) after January," he said in response to a question on antivirus cooperation.

"There has been no direct response from them as of now. Until the 80-day campaign is completed and their policy is shaped at the party congress next January, communication or exchange seems unlikely," he added.

He noted that inter-Korean relations and U.S.-North Korea relations appear to be "making a U-turn" after tensions quickly escalated in June when the North blew up the inter-Korean joint liaison office.

"As the U.S. presidential elections are over, the situation will move toward a thawing (of relations) after the North's 8th party congress next January and the inauguration of Joe Biden as U.S. president," he said.

Lee also said that the South should share coronavirus treatment and test kits with the North. Last month, his remark on sharing coronavirus vaccines came under fire from conservatives as it came at a time when the country has yet to secure enough vaccines.

"It is more urgent to secure vaccines for our own use. But I think there are enough supplies for treatment and test kits," he said.

He pointed out that protecting the North from the coronavirus is in effect "protecting ourselves as it is directly related to keeping the South Korean people safe from COVID-19."

In October, North Korean leader Kim Jong-un launched the 80-day campaign to achieve the country's national and economic goals before the party congress.

During the party congress, the first of its kind in about four years, North Korea is expected to unveil a new economic development scheme. Observers say that the North could also send messages on stalled inter-Korean relations and nuclear talks with Washington. 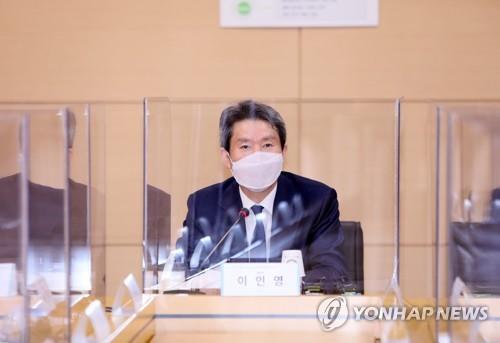 N. Korea may respond to calls for antivirus cooperation after party congress: minister

N. Korea may respond to calls for antivirus cooperation after party congress: minister