Three Army officers at the Sangmudae Artillery School in the southwestern county of Jangseong were confirmed to have been infected after coming into contact with a colleague who earlier tested positive, according to the ministry.

The total number of COVID-19 cases reported at Sangmudae has grown to 30.

One soldier stationed in the western city of Incheon also showed symptoms while in isolation after contacting a patient at his unit, bringing the total number of patients there to nine, the ministry said.

Up until Tuesday morning, the military has reported a total of 431 coronavirus cases since the pandemic broke out in the country early this year, with the figure growing faster since mid-November.

Currently, 1,688 service members are in isolation in accordance with the health authorities' guidelines, and the military has quarantined an additional 7,011 people under stricter antivirus schemes of its own as a preventive step, according to the ministry.

Nationwide, the country reported 594 new virus cases on Tuesday, including 566 domestically transmitted ones, raising the total caseload to 38,755. 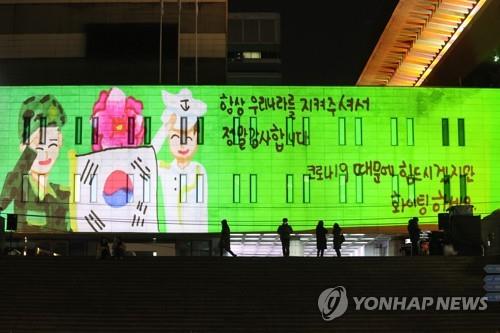