SEOUL, Dec. 8 (Yonhap) -- The government on Tuesday designated June 10 as a national day to commemorate an independence movement held in 1926 against Japanese colonial rule.

The interior ministry said the designation was made under a revised regulation and approved at a Cabinet meeting earlier in the day.

"We hope this designation of a national day will lead to a reappraisal of the historical significance of the June 10 independence movement and the succession and development of our patriotic martyrs' spirit among future generations," the ministry said in a press release. 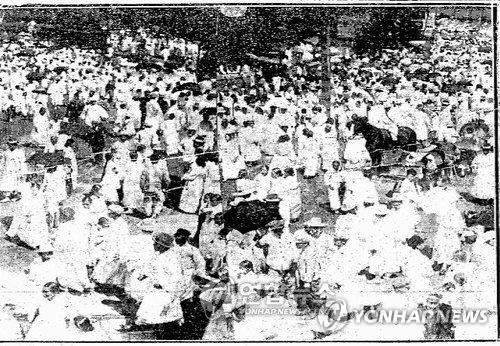 The demonstration spread to other parts of the country, resulting in the arrests of some 1,000 Koreans by the Japanese. Of them, 11 were sent to prison.

The June 10 movement is considered one of the most prominent independence movements, along with those held on March 1, 1919, and Nov. 3, 1929.

The Ministry of Patriots and Veterans Affairs has been tasked with holding a ceremony to mark the new national day starting next year.