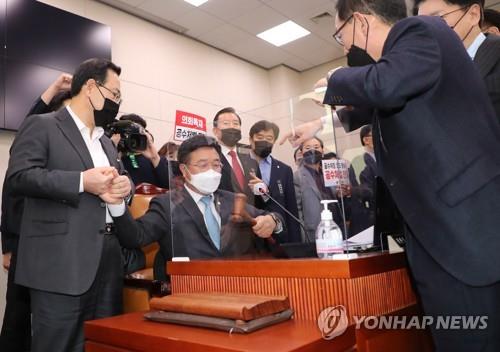 The committee passed two other major bills on reforming so-called power institutions: one on giving police more investigative authority and the other on depriving the National Intelligence Service of the right carry out anti-communist investigations.

The revision to the police law stipulates the introduction of a local autonomous police system and the establishment of a national investigation office.

The new NIS act, which also passed the committee, would relocate its authority to investigate espionage or national security-related cases to the police and limit the scope of the agency's intelligence gathering to North Korea, overseas matters, terrorism protection and other less politically sensitive issues.

The legislation would take effect after a three-year grace period, if it is finally handled in a plenary floor session. 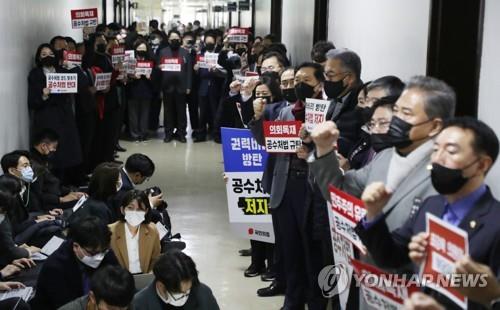 The panel also passed a revision bill on prohibiting the launching of anti-Pyongyang leaflets across the inter-Korean border, paving the way for lawmakers to vote on it during the plenary session of the National Assembly on Wednesday, the last day of its regular session.

DP members snubbed strong protests from their conservative counterparts in the committee.

Known as the "anti-leaflet law," the revision to the law on developing inter-Korean relations calls for punishment of up to three years in prison or a fine of up to 30 million won (US$27,600) for violating a related accord between the two Koreas via the sending of propaganda leaflets.

The North has long condemned the launches of leaflets, many of which contain criticism of the Kim Jong-un regime, by activist groups mainly led by defectors.

In June, the North blew up an inter-Korean liaison office in its border town of Kaesong, citing the propaganda leaflets flown from the South.

Separately, the committee passed a revision to the special law on the May 18 Gwangju uprising, a nationwide democracy movement that originated in the namesake southern city in 1980.

Under the proposed legislation, those who release false or distorted information on the historic movement face a maximum of five years in prison or a fine of up to 70 million won.