SEOUL, Dec. 9 (Yonhap) -- A South Korean parliamentary committee on Tuesday passed a controversial bill that would require listed companies to name at least one auditor from outside their board and limit the voting powers of the biggest shareholders and their families to 3 percent in the auditor's appointment.

The proposed revision to the Commercial Act was passed by the Legislation and Judiciary Committee of the National Assembly, where the ruling Democratic Party (DP) holds a majority. The main opposition People Power Party boycotted the vote.

Businesses have strongly opposed the revision, claiming that the move will hurt shareholders' rights and that speculators can take advantage of the rule. 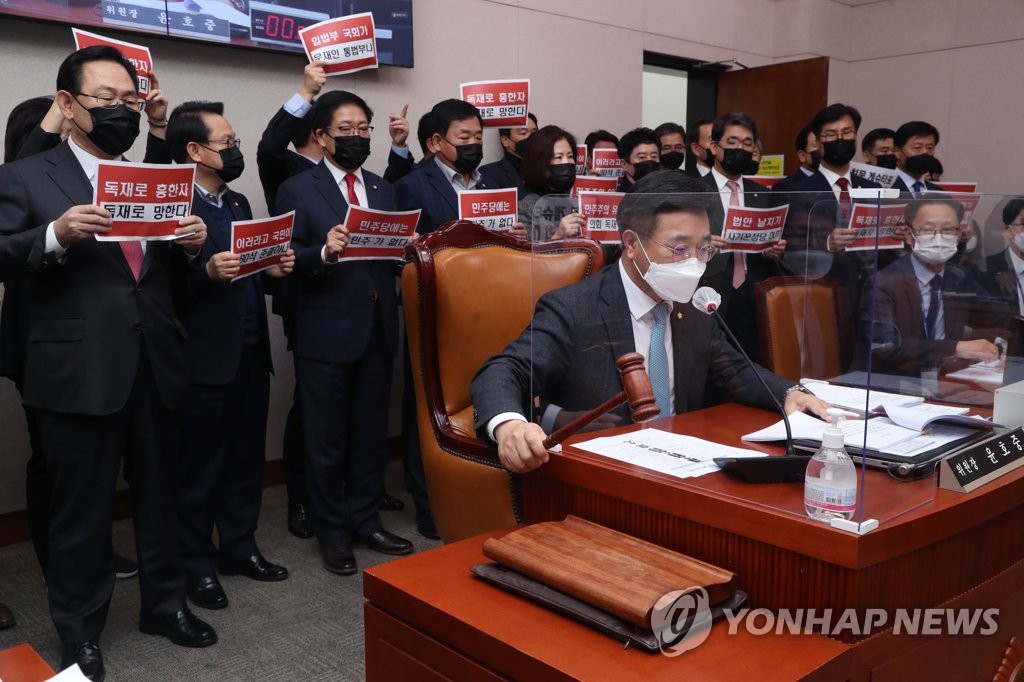 In consideration of such concerns, the bill was changed to ease the limitation. The original bill required the combined voting power of the top shareholder and affiliated people to be limited to 3 percent but the final version allows them to cast the 3-percent vote separately.

The revised bill will also pave the way for a shareholder of a parent company to file a derivative suit against the board members of an affiliate firm. The shareholder will need to have a stake of 0.5 percent or more for listed firms. The figure stands at 1 percent for non-listed firms.

The main opposition did not participate in the vote, as the ruling party passed the bill to revise the act on the Corruption Investigation Office for High-ranking Officials (CIO) earlier in the day.

Late at night, the National Policy Committee passed a revision to the Fair Trade Act, which would broaden the scope of companies subject to a stricter regulation on inter-affiliate business deals.

The proposed revision led by the ruling party would set the threshold at 20 percent for both categories.

Meanwhile, the DP decided not to seek the abolition of the Fair Trade Commission's exclusive right to seek prosecution of businesses over violation of fair trade rules.

The committee also passed a bill to enhance monitoring of conglomerates operating multiple financial arms, including Samsung, Hyundai, and Hanwha.

The new rule came as the existing regulations only focus on tracking financial holding companies, leaving conglomerates in blind spots.