SEOUL, Dec. 9 (Yonhap) -- An international forum kicked off in Seoul on Wednesday to share South Korea's achievements in global cooperation and explore its future roles and challenges in the post-COVID-19 era.

Global Korea Convention 2020 opened in a ceremony at the K-Hotel Seoul for a three-day run, with the in-person and online attendance of about 30 dignitaries, including Angel Gurría, secretary-general of the Organization for Economic Cooperation and Development; Prime Minister Chung Sye-kyun; and National Assembly Speaker Park Byeong-seug. 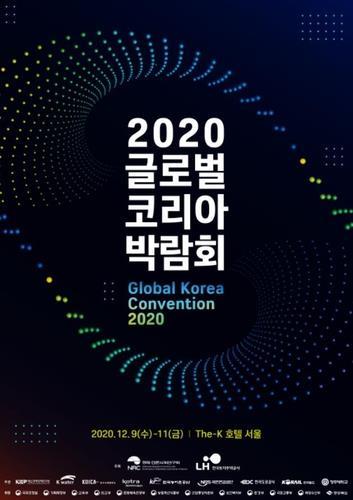 The National Research Council for Economics, Humanities and Social Sciences and the Korea Land & Housing Corp. are hosting the convention, with sponsorship from about 150 government and public institutions.

Several dozen government departments and public institutions are to introduce various experiences on public diplomacy and international cooperation since the independence of Korea in 1945, as well as their efforts to pursue public diplomacy focused on peace, human rights, democracy and values enabling sustainable development of humankind.

In particular, the convention is to put the spotlight on South Korea's diverse and rich experience as the world's only country that has transformed from an aid recipient to a donor country.

During the opening ceremony, Chung gave a congratulatory video address, and former Norwegian Prime Minister Gro Harlem Brundtland made a keynote speech under the title of "international cooperation for world peace and sustainable development."

A "Vision Declaration" was also announced at the opening ceremony, declaring a vision of South Korea's future as a world leader that contributes to international peace, prosperity and sustainable development.

"The Republic of Korea, once a recipient of aid, has now become a provider of aid. Korea overcame its challenges and achieved both economic development and full democracy in a short period. Now, it is time to share Korea's dynamic energy with others for world peace, common prosperity and sustainable development of humankind," said the declaration.

"Embracing 'inclusive multilateralism' as our core value, Korea is taking its first step forward to form a new wave of cooperation that pursues world peace, common prosperity and sustainable development," it said.

Hosts and organizers said Seoul's efforts to overcome the coronavirus pandemic, dubbed "K-Quarantine," and the Korean New Deal initiative aimed at stimulating economic growth and job creation through digital and green projects will be intensively discussed at the convention.

To that end, the convention will proceed under 19 subjects, including K-Quarantine, climate change, eco smart city and inclusive multilateralism, they noted.

The Korea International Cooperation Agency and 35 other government institutions will introduce about 100 exemplary cases of international cooperation in online and offline presentations.

In consideration of the spread of the coronavirus, all convention programs will be broadcast live at the convention's website (globalkoreaconvention.kr).

In a special event, Minister of Oceans and Fisheries Moon Seong-hyeok will hold a videoconference interview with Korean researchers stationed at the nation's second Antarctic base called Jang Bogo Station and give them a message of encouragement.

Prior to the opening ceremony, South Korean alternative pop band Leenalchi gave a performance featuring a new genre of traditional Korean music that mixes traditional and modern trends with pansori, a Korean genre of musical storytelling, and group dance movements.