"I understand the important role in the Department of Defense and the role that it plays in maintaining stability and deterring aggression and defending and supporting critical alliances around the world, including in the Asia-Pacific, and Europe and around the world," the retired U.S. Army general said at a press conference in Wilmington, Delaware, where he was introduced by Biden.

"I firmly believe, as you have said before, sir, that America is strongest when it works with its allies," added Austin. 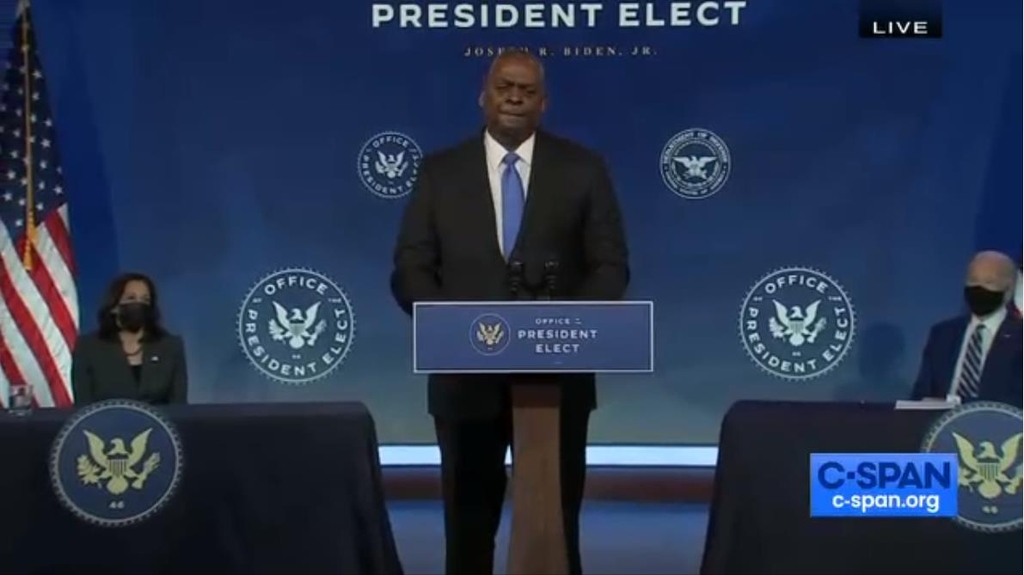 Biden has repeatedly highlighted the need to repair and further improve U.S. relations with other countries, especially its traditional allies such as South Korea, as a way of restoring the country's "rightful" place as a leader on the global stage.

The president-elect again underlined the importance of working with other countries, while offering reasons for his selection of the former general to be his defense chief.

"What we need is in-depth understanding of what it takes to deter threats wherever they arise, and to defend the American people, our vital interest and our allies from harm," he said.

Noting the law requires a defense secretary nominee to have left the armed services at least seven years prior to his or her nomination, Biden said he would not have asked for an exception had it not been necessary.

"There's a good reason for this law that I fully understand and respect. I will not be asking for this exception if I did not believe this moment in our history didn't call for it -- it does call for it -- and if I didn't have the faith I have in Lloyd Austin to ask for it," Biden said at the press conference. "I believe in the importance of civilian-controlled military. So does the secretary-designate, Austin."

Austin served as vice chief of staff of the Army before retiring in 2016.

Vice President-elect Kamala Harris said Austin, if confirmed, will not only help strengthen the United States' own security, but also its role "as a partner to allies around the world."