SEOUL, Dec. 10 (Yonhap) -- It's important to be in the right market at the right time, and Hyundai Motor Group Chairman Chung Euisun knows it's time to plug into the future: electric vehicles (EV).

Going electric isn't just an eco-friendly goal but is becoming a new business reality sooner than expected, pressuring the Korean automaking group to join the global rush to bring fleets of EVs to the market over the next few years.

The world's No. 5 automaker is among the established industry players that put a massive amount of resources into catching up with EV pioneer Tesla, which became the world's most valuable carmaker with innovative approaches to building cars.

Chung, the longtime heir who officially took the group's top post in October, is fully committed to the EV transition as stricter emission goals and eco-friendly policies are expected to boost demand for green cars in major markets.

"The eco-friendly vehicle business is crucial to the survival of Hyundai Motor Group," Chung said in July. "Hyundai Motor Group will make a leap forward for EV business next year as next-generation EVs made on the dedicated platform will hit the market." 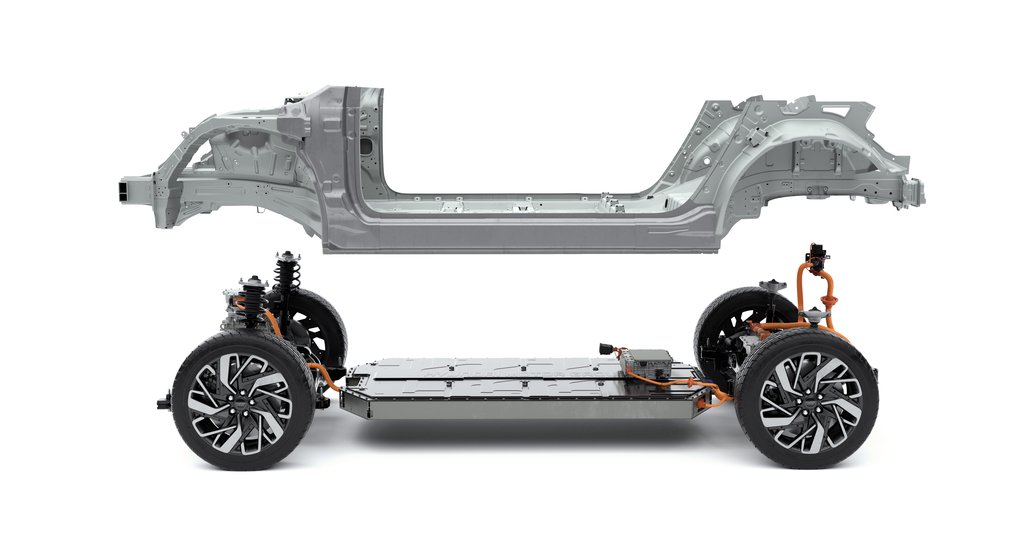 The automotive group has set a goal of releasing 23 EV models, including 11 pure electric models, by 2025 to become the world's third-largest EV maker with 1 million sales.

According to the data by Seoul-based SNE Research, Hyundai Motor Group ranked fourth in the global EV market in the January-September period, following Tesla, Volkswagen and Renault-Nissan-Mitsubishi.

Hyundai and Kia sold a combined 130,000 EVs, including pure electrics and plug-in hybrids, in the first nine months of this year, up 40.7 percent from the same period last year, the data showed.

To speed up the electrification plan, Hyundai has unveiled its own EV platform, electric-global modular platform (E-GMP), to design and engineer cars from the start to be EVs, following in the footsteps of other traditional automakers, including Volkswagen, General Motors and Toyota.

"We can deliver big interior space with the platform. You will see new features that you haven't seen from other EVs," Albert Biermann, the head of Hyundai's R&D division, said in a virtual briefing last week. "With E-GMP platform, we can deliver new user experiences with high quality from the start."

The standardized EV platform can be fully charged up to 80 percent in just 18 minutes and can travel up to 500 kilometers on a single charge. Its body is designed to better protect passengers and the battery, a key component of EVs, from collision, the automaker said.

Hyundai said it plans to launch the all-electric crossover SUV Ioniq 5 underpinned by E-GMP early next year, and Kia and Hyundai's premium brand Genesis will also bring in EV models riding on the platform in the same year.

"The launch of EVs underpinned by the dedicated platform next year is expected to boost Hyundai's revenue and shares," Song Seon-jae, an analyst at Hana Investment Securities, said. "Its shares are undervalued compared with other global carmakers, but robust sales of premium cars and a hike in eco-friendly vehicle sales will help lift its share prices." 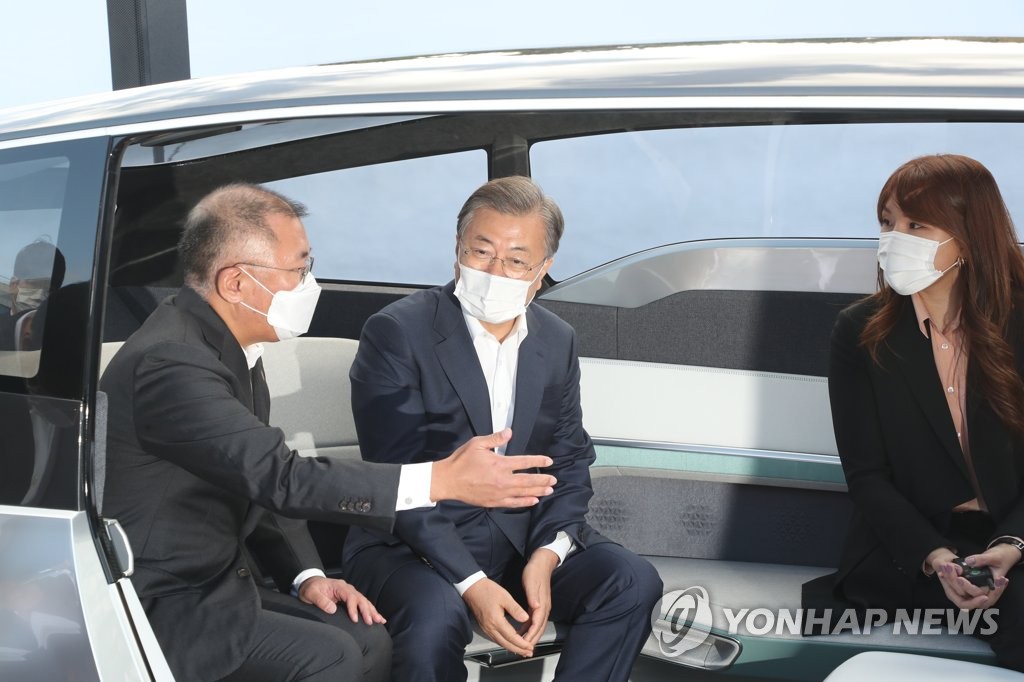 Market watchers say the key challenge of the EV era will be how to make and sell next-generation cars that people want to buy and bring their prices to be comparable to internal combustion engine cars.

Tesla CEO Elon Musk in September teased a $25,000 EV with plans for in-house battery production, about half the starting price of the Model 3 mass-market sedan costing over $50,000 in the Korean market.

Prices of the Kona EV and Kia Soul EV are priced below 50 million won in the domestic market, while government subsidies can cut about 10 million from the final prices of EVs.

"Hyundai has maintained a fast follower status in the traditional car market, but it will have to make efforts to create a market leader's image in the new EV industry and improve customer experience," said Lee Ho-jung, a researcher at the Korea Automotive Technology Institute.

While Hyundai relies on LG Chem Ltd. and SK Innovation Co. for EV batteries, the carmaker said it has been developing its own battery technology to drive down costs of EVs down the road. In the meantime, the company will continue to partner with battery makers, officials said.

"We are also developing lithium-ion battery and other battery technologies in our own laboratory," Albertman said. "When the time has come, we will bring the best battery at a reasonable price." 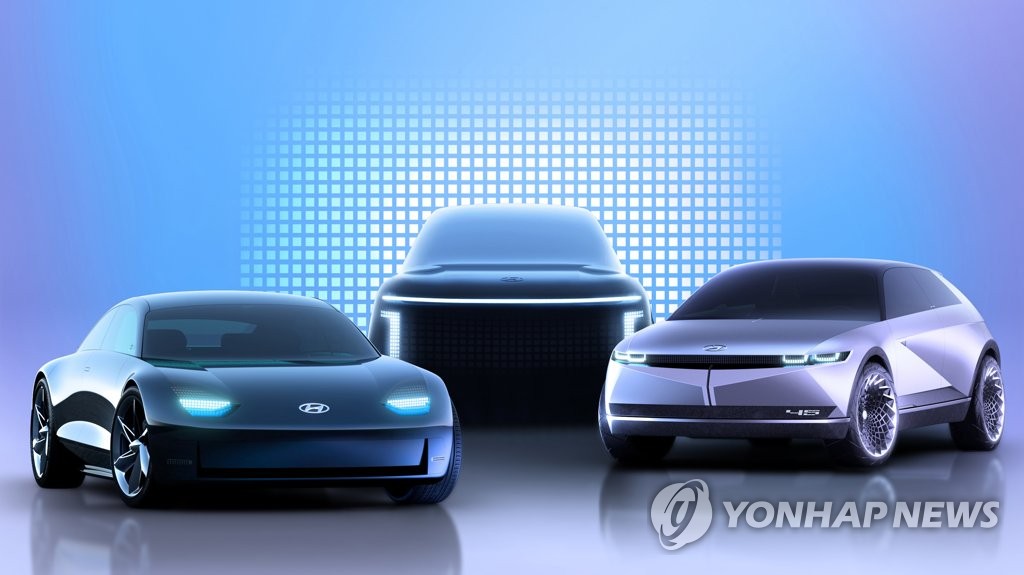 It is also important to assure consumers of safety as a series of fires in Hyundai's EVs were reported at home and abroad, raising concerns over the new breed of cars.

Hyundai has recalled 77,000 of its top-selling Kona EVs since October after 16 battery-related fires occurred in South Korea, the United States, Canada and Europe over the past two years.

Hyundai claimed internal damage to certain cells of the lithium-ion battery caused the fire, but LG Chem denied any cell defects. A joint investigation is currently under way.

Last month, 173 Kona owners filed a class-action lawsuit against the carmaker to demand compensation, claiming the battery fires reduced the value of their EVs.

"In a time of technological transition, consumers' perceptions also change, which is the right time for creating a new brand image," Lee said. "Hyundai Motor can lay the ground for new growth drivers if it shifts focus from the competition in the traditional auto industry and succeeds in innovation in accordance with the changing business environment."