In a Realmeter survey on 1,509 voters nationwide from Monday through Wednesday, 37.1 percent of respondents said they supported Moon.

The figure represents a 0.3 percentage point dip from the 37.4 percent approval rating from last week, when Moon lost 6.4 percentage points in support to fall below the 40 percent mark in favorability for the first time during his presidency. 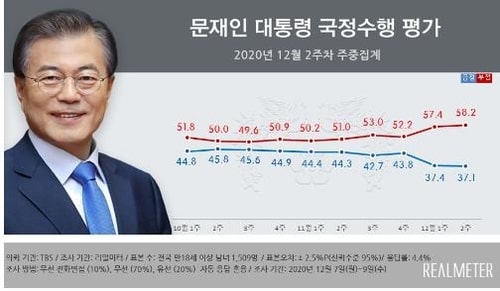 The proportion of those disapproving of Moon's job, meanwhile, climbed 0.8 percentage point to reach a new high of 58.2 percent. The rate of those who said they weren't sure stood at 4.7 percent, down 0.5 percentage point.

The ruling Democratic Party, however, saw its popularity inch up 1.7 percentage points to 31.4 percent. In contrast, the figure for the main opposition People Power Party slid 0.8 percentage point to 30.5 percent.

The survey results came amid the escalating conflict between Justice Minister Choo Mi-ae and Prosecutor General Yoon Seok-youl, with the justice ministry planning to discuss disciplinary measures against Yoon over alleged irregularities later in the day.

Many view them as locking horns over the Moon government's push to reform the state prosecution service often accused of having excessive authority and power.

It also comes as the number of new virus cases approached 700 for the second straight day on Thursday, as new infections continued to pile up beyond the greater Seoul area, further putting health authorities on edge.