SEOUL, Dec. 10 (Yonhap) -- More than 4 out of every 10 newlywed couples in South Korea had no children last year, data showed Thursday, amid the country's chronic low birthrate and the trend of late marriages.

Of 998,000 first-time and newly married couples -- who had been legally married in the five years up to Nov. 1, 2019, 42.5 percent had no kids, according to the data compiled by Statistics Korea.

South Korea is struggling with a decline in child births as many young people delay marriage or give up getting married or having babies amid a prolonged economic slowdown.

The country's total fertility rate -- the average number of children a woman bears in her lifetime -- hit a fresh record low of 0.92 in 2019, marking the second straight year for the rate to drop below 1. 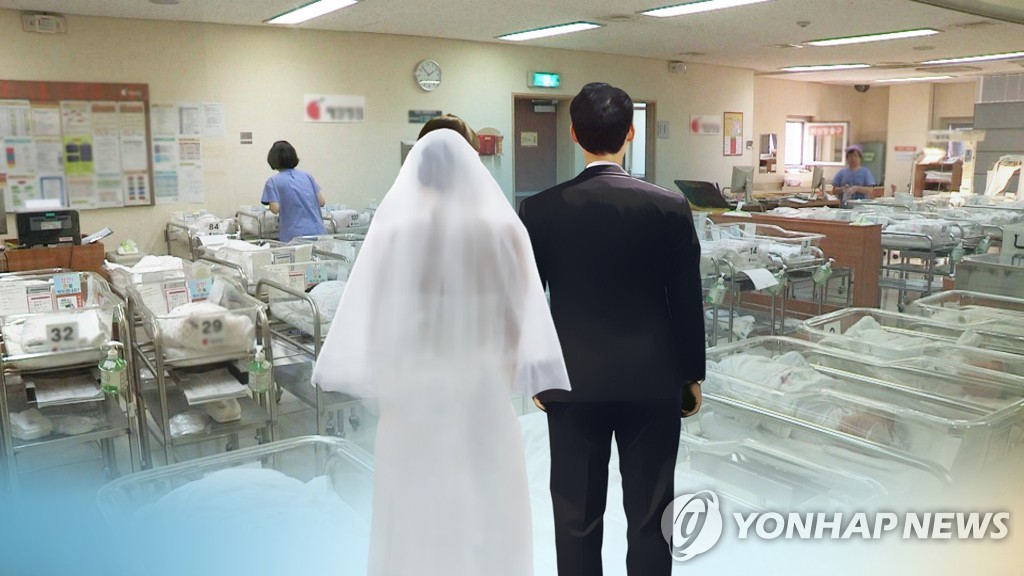 The number of newborns by the newlyweds averaged 0.71 in 2019, down from 0.74 a year earlier, the data showed, reflecting the country's low birthrate.

Among newlywed couples who both work, 47.6 percent were childless in 2019, while the corresponding rate was 36.6 percent for couples with a single breadwinner.

Whether to possess houses also affected child births, the data showed. Newlyweds who have their own homes had an average of 0.79 newborn, higher than 0.65 for newly married couples without a home.

Meanwhile, of the newly married people, double-income couples reached 490,000 as of end-October 2019, accounting for 49.1 percent of the total.

They also took loans worth 112 million won on average from financial institutions last year, up 12.1 percent from a year earlier, amid rising housing prices.

The total number of newlyweds that comprise first-time and remarried couples reached 1.26 million last year, down 4.7 percent from a year earlier, the data showed.

Over 40 pct of newlyweds had no kids last year: data

Over 40 pct of newlyweds had no kids last year: data