SEOUL, Dec. 10 (Yonhap) -- President Moon Jae-in pledged a strong push for carbon neutrality "in all areas of industry, the economy, and society," as he declared the 2050 vision in a statement broadcast live Thursday.

"Carbon neutrality is a difficult but unavoidable task," he said during the evening event, titled "Republic of Korea's Declaration of 2050 Carbon Neutrality: Before It's Too Late."

In the statement from Cheong Wa Dae, Moon announced that the country's principal energy source will be shifted mainly to renewable energy.

"The government will foster three new energy industries: renewable energy, hydrogen and energy IT," he said. "Second, we will strive to create a low-carbon industry ecosystem." 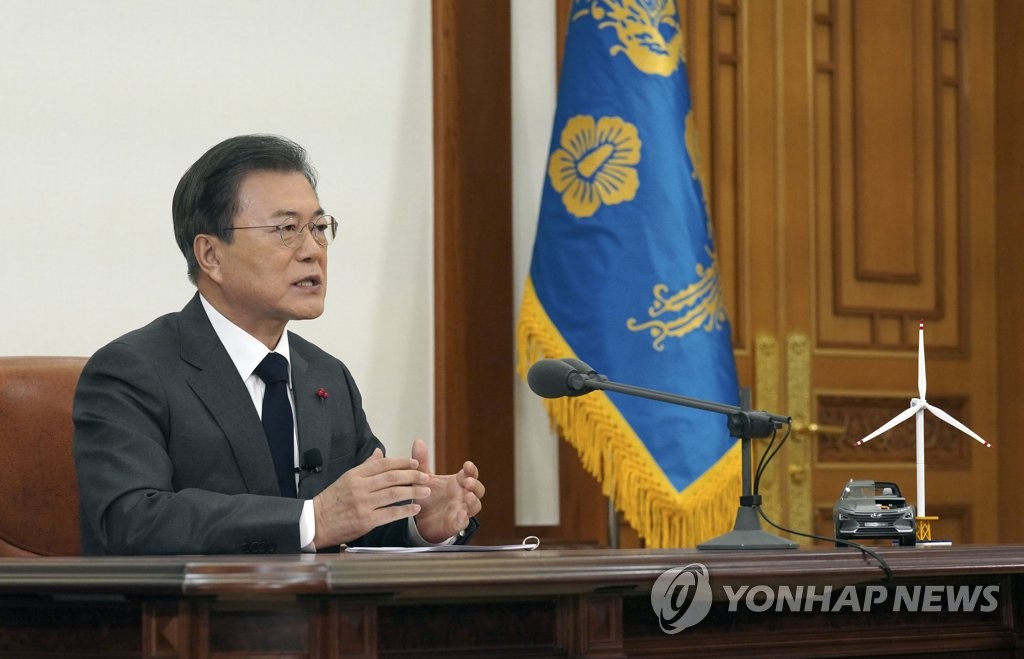 South Korea aims to "actively innovate and lead the international community by seizing the global climate crisis response as an opportunity for an inclusive, sustainable growth," he added. "It is also about creating a healthy and prosperous future for our children."

Moon emphasized the urgency of joining hands to cope with the challenge facing the world.

"The climate crisis -- just as COVID-19 has done -- will hurt the most vulnerable areas, groups and people first and will end up inflicting pain on all of our lives," he pointed out. "Just as our today came about by what we did yesterday, we can change our tomorrow depending on what we do today."

The president, first, and briefly, unveiled the ambitious scheme for South Korea to go carbon neutral by 2050 during his budget speech at the National Assembly in October. It made South Korea, one of the world's most fossil fuel-reliant economies, the latest country to commit to net-zero carbon dioxide emissions.

He has since made relevant comments in public several times, including during a virtual summit of Group of 20 nations in November.

He also announced a plan to establish a presidential panel of government officials and private experts for the implementation of related policies.

The initiative is in line with the Moon administration's push for the Green New Deal campaign, which is a key pillar of the so-called Korean-version New Deal together with the Digital New Deal.

"We will establish carbon neutrality-friendly fiscal programs and actively promote green financing and funds so that the people can enthusiastically participate in the Green New Deal," Moon said.

Moon delivered the speech, wearing a necktie made of eco-friendly materials using plastic waste, according to Cheong Wa Dae.