The KOSPI retreated after a 2.02 percent gain the previous session, led by massive foreign selling. 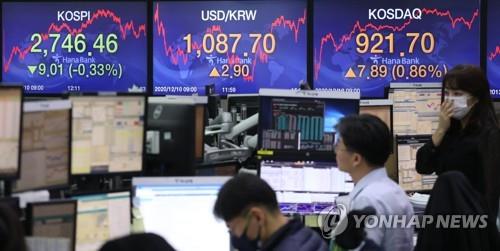 Volatility remained high the entire session, with the KOSPI plunging over 1 percent in the morning and briefly spiking to another all-time high in the afternoon.

Analysts said uncertainties increased on "the quadruple witching day," or the expiration day of four key derivatives, including KOSPI-tracking options and futures.

The local currency closed at 1,187.7 won per dollar, up 2.9 won from the previous session's close.