SEOUL, Dec. 10 (Yonhap) -- Defense Minister Suh Wook on Thursday asked for the international community's support to bring peace on the Korean Peninsula, saying it will also be conducive to building peace in the region.

Suh made the appeal during the 7th Association of Southeast Asian Nations (ASEAN) Defense Ministers' Meeting-Plus (ADMM-Plus) held via a video link. The meeting brought together top defense officials from 18 countries, including the United States, China and Japan.

"Eased tension on the Korean Peninsula and the establishment of trust will greatly contribute to resolving security threats in the Asia Pacific region and ensuring co-prosperity," he said.

The annual ministerial meeting was originally planned to take place in Vietnam this year, but was changed to a videoconference due to the coronavirus situation.

The minister also shared his country's efforts to fight COVID-19 together with the international community.

South Korea has provided some US$10 million worth of medical equipment to ASEAN countries, as well as 1 million units of face masks to foreign veterans in 22 countries who fought alongside the South during the 1950-53 Korean War, Suh said.

During the meeting, the minister also said South Korea will expand participation in multinational combined exercises led by the ASEAN countries as part of its efforts to bolster regional cooperation.

"We will expand the size of participation during various command post and field training exercises," the minister said.

Top defense officials from the participating countries agreed to work together to tackle common security threats, such as the new coronavirus, the ministry said, adding that the meeting served as a chance to enhance momentum for defense cooperation with major countries in the region despite the pandemic.

Launched in 2010, the ADMM-Plus has been a venue for consultations on major regional security issues. It had been held every two or three years but became an annual event from 2018. 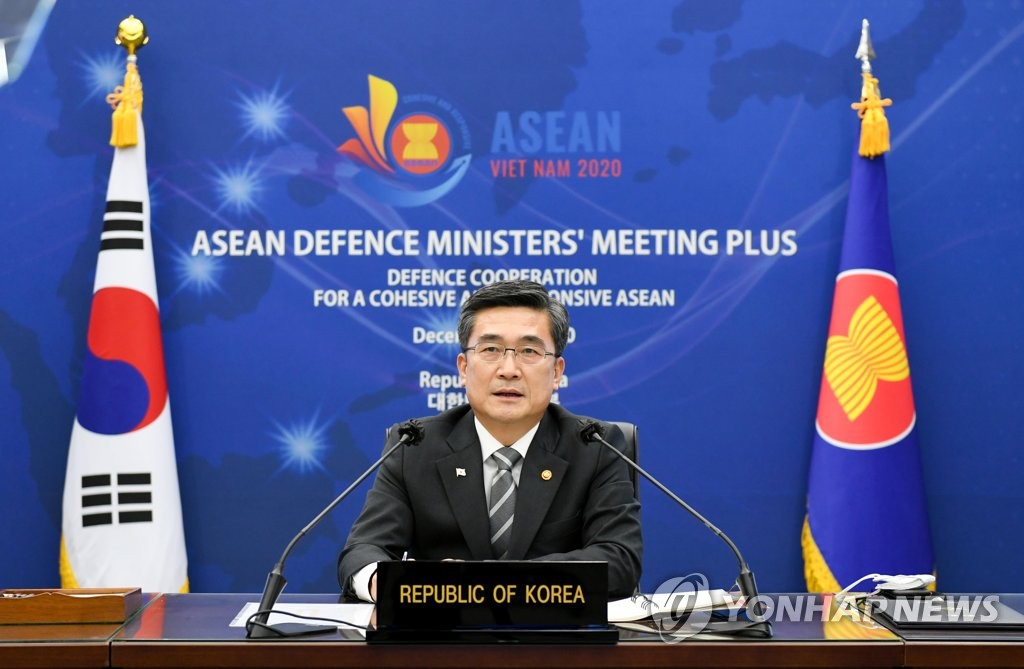