SEOUL, Dec. 11 (Yonhap) -- A group of novice lawmakers from the conservative main opposition party said Friday they will join the party's ongoing filibuster to block the parliamentary passage of a contentious bill.

The participation pledged by all of the People Power Party's 58 first-term lawmakers in the filibuster raises the possibility that the marathon debate the party launched Thursday could continue throughout the current extraordinary parliamentary session's one-month run.

The main opposition party began filibustering Thursday afternoon to stop a revision bill on the National Intelligence Service (NIS) law from passing through the National Assembly, where the ruling Democratic Party commands a majority. 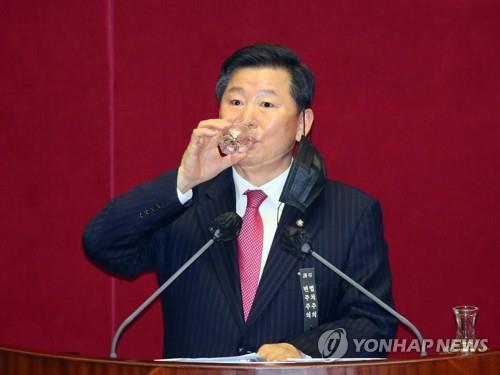 The bill primarily aims at transferring the state spy agency's authority to conduct anti-communist investigations to the police.

It is one of the two remaining bills the main opposition is campaigning to block due to what the party says is their unconstitutionality. The other bill centers on prohibiting the launching of anti-Pyongyang leaflets across the inter-Korean border.

"Starting today, all 58 of us will begin (to join) the overnight filibuster," the group of novice lawmakers said in a press conference.

"We greatly anticipate that our desperation and sincerity would appeal to the people, albeit a very little," the lawmakers said, indicating that they will push for their party's ongoing filibuster to continue till the last day of the extra parliamentary session on Jan. 8.

The National Assembly law allows a filibuster to continue indefinitely, while the DP can break it with 180 votes, 24 hours after it begins. But the ruling party has announced that it will not invoke its right to halt the filibuster to respect the opposition's right to sufficient parliamentary debate.