SEOUL, Dec. 12 (Yonhap) -- "It's crucial to have an active fantasy life." "Artificial desires are despoiling the earth." "Protect me from what I want." "Solitude is enriching."

These aphorisms and poetic texts engraved on stone benches and blinking and rolling across LED pillars hanging from the ceiling are some of American artist Jenny Holzer's works that are on display at Kukje Gallery in Seoul. 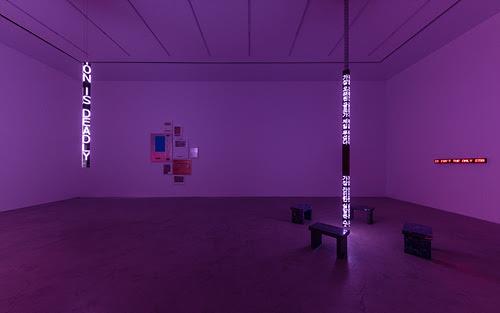 Holzer, born in 1950, is best known for bringing art to everyday life. Her works, which use language as a key medium, have appeared in the most mundane places, like on stone benches, electronic billboards and even T-shirts.

Through strong and provocative use of words, she nudges viewers to question the world through the message they are seeing. In this sense, Holzer said the new exhibition titled "It's Crucial to Have an Active Fantasy Life" could aptly play that function in an era of confusion and doubt.

"We've had to move studio. It has been very difficult practically speaking. But of course, the worst is watching people suffer and die," she said of the pandemic in a video message recorded at a farm house she is staying at.

While Holzer does not directly address the situation in the works on display, she said the thought-provoking works could be relatable at a time like this.

"There's no COVID-specific work in this exhibition, but I want to believe some of the work is empathic, sympathetic. More of the work is questioning -- this is a time for questions," she said. 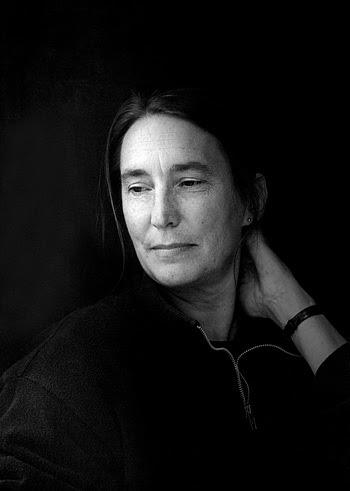 The exhibition takes place at two venues in the gallery. Holzer's signature LED works fill an enclosed and dark venue, while her Redaction Painting series that twists declassified government documents is on display in a more airy and sunlit room. Stone benches carrying poetic texts are nonchalantly placed in between the LED signs and paintings.

"Truisms" (2020), a four-sided LED sign that is more than three meters long, is one of the most visually striking features at the first venue. It displays phrases from "Truisms," a series of statements Holzer previously described as "Jenny Holzer's 'Reader's Digest' version of Western and Eastern thought."

LED signs have been a core part of Holzer's artistry, which she found to resemble the human voice.

"A great function of the signs is their capacity to move, which I love because it's so much like the spoken word: You can emphasize; you can roll and pause, which is the kinetic equivalent to inflection in the voice."

Holzer, who first experimented with the Korean language for her show at the National Museum of Modern and Contemporary Art in Seoul last year, continued to incorporate it in the recent work. Phrases in the Korean alphabet flicker through the LED post in green, purple and white. 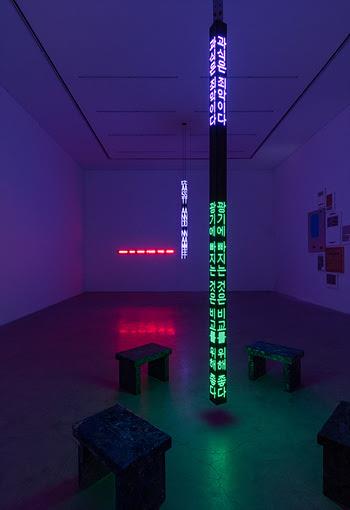 The second venue focuses on works that reflect her vocal stance on social and political issues. Most recently, Holzer launched a public art campaign ahead of the U.S. elections. She deployed LED trucks to flash phrases like "Vote Early," "Protect Yourself" and "Enough," urging the public to vote.

In the Redaction Painting series on display, the artist takes aim at institutional power by transforming declassified but heavily redacted documents into giant abstractions. She wittily conducts the transition by covering the redacted parts with gold, palladium and platinum leaf. 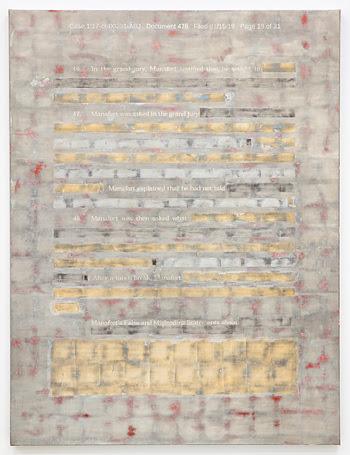 One wall of the venue features her artworks based on the so-called Mueller Report, or the "Report on the Investigation into Russian Interference in the 2016 Presidential Election." The 448-page report carries the findings of special counsel Robert Mueller's probe on the controversy surrounding the 2016 U.S. presidential election.

For the 36 paintings on display, the artist, who has shrewdly utilized technology as an artistic technique, turned to the more traditional method of watercolor painting.

"I've always wanted to be a painter, but I've been timid to do it since I failed so miserably in the 70s. So late in life, I decided to go ahead anyway," she said.

Holzer said "frustration" was what led her to create works based on the Mueller Report.

"The Mueller Report was frustrating in significant ways, so I decided to paint on it while I waited for a result," she said. 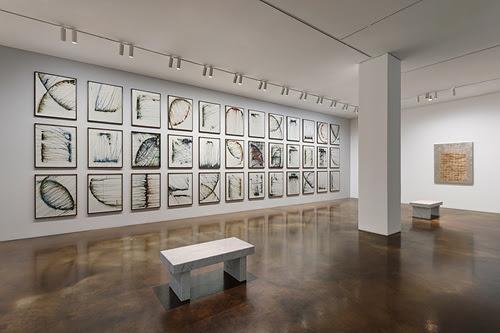 Jenny Holzer's works hit home at a 'time for questions'

Jenny Holzer's works hit home at a 'time for questions'