SEJONG, Dec. 11 (Yonhap) -- An advocacy group for private educational institutions, or "hagwon," on Friday urged the government to retract the no-assembly order imposed on its members in the greater Seoul area as part of anti-COVID-19 measures.

On Tuesday, the government ordered hagwons in Seoul, Incheon and Gyeonggi Province to close for three weeks in a bid to prevent the spread of the coronavirus infections among young students.

The no-assembly order on hagwon is to be implemented when the capital area comes under a Level 3 social distancing scheme, the strongest in the five-tier system. The greater Seoul area is currently under Level 2.5. 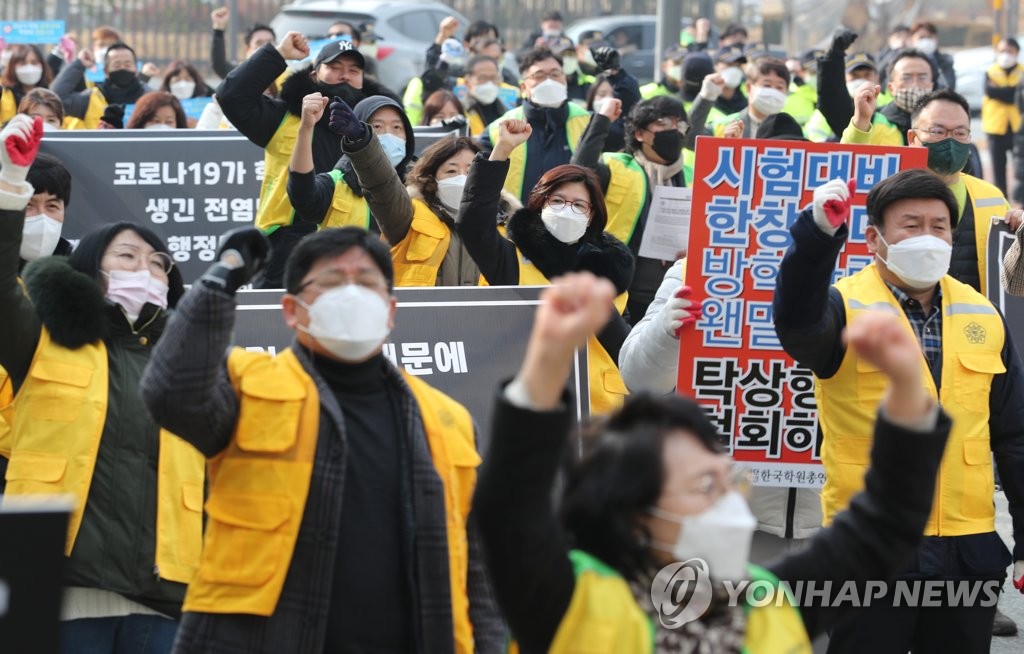 "The government must withdraw the no-assembly order for hagwon by Saturday," the Korea Association of Hakwon (KAOH) said during its rally held in the central administrative city of Sejong. The group's name uses a different romanization for the Korean word "hagwon."

The association said it has already filed an administrative lawsuit against the no-assembly order and an injunction hearing is to be held on Friday afternoon.

About 100 people, including hagwon owners, teachers, van drivers and parents, attended the rally held in front of the Ministry of Health and Welfare building.

They accused the government of abusing its power by imposing the unreasonably strong no-assembly order, while complaining that they are being asked to sacrifice themselves again without the provision of even a minimal safety net.

"The government abused its power when it decided to shut down hagwons in the greater Seoul area despite a clear guideline on the five-tier social distancing scheme," the group added.

The group also said it will proceed with all possible measures until its request is accepted.