Trading volume was high at about 1.1 billion shares worth some 18 trillion won (US$16.5 billion), with gainers outnumbering losers 659 to 192. 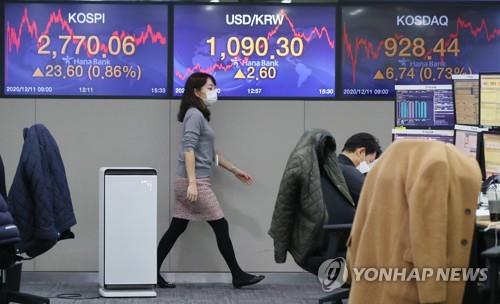 Investor sentiment got a boost from a U.S. government advisory panel's endorsement of widespread use of Pfizer's coronavirus vaccine.

Investors pinned high hopes on the endorsement accelerating the U.S. Food and Drug Administration's emergency authorization for the vaccine and hastening the global economic recovery.

The local currency closed at 1,090.3 won per dollar, down 2.6 won from the previous session's close.