DAEGU, Dec. 11 (Yonhap) -- A South Korean court struck down appeals filed by a Japanese firm against a ruling that ordered a freeze of its assets here to compensate victims of wartime forced labor.

According to the Daegu District Court in southeastern Korea on Friday, its Pohang branch rejected Thursday two appeals filed earlier this week by Japan's Nippon Steel & Sumitomo Metal Corp over the court's decision to seize its assets.

The court dismissed a similar appeal in August, calling the plaintiff's claim "baseless."

In October 2018, South Korea's Supreme Court ordered Nippon Steel to pay four South Koreans 100 million won (US$91,600) each in compensation for their forced labor and unpaid work during World War II. Korea was under Japan's colonization from 1910-45.

Since the firm did not respond to the ruling, the plaintiffs requested an asset seizure, which was approved by the court in Pohang.

The seized assets connected to the three cases pending in the Pohang court are 194,794 shares, worth around 973 million won in PNR, a joint venture set up by Nippon Steel and South Korean steelmaker POSCO, which recycles byproducts from steelmaking.

In order to proceed with a stalled legal process, the court has instituted the legal procedure of making a public notice, under which legal documents are considered to have been delivered to an unresponsive defendant. 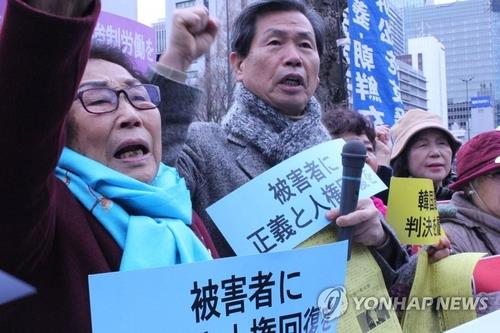