SEOUL, Dec. 14 (Yonhap) -- Unionized workers at Kia Motors Corp. will extend their partial strike this week to demand higher wages and bonuses amid the COVID-19 pandemic, the union said Monday.

Daytime and night-duty workers will hold a four-hour strike daily at Kia's three domestic plants in Gwangmyeong and Hwaseong, both near Seoul, and Gwangju, 330 kilometers south of Seoul, from Monday to Thursday and stage a six-hour walkout in the plants Friday, a union spokesman said.

Kia workers already have held a partial strike at the plants for nine working days in the past three weeks, resulting in 32,000 vehicles in production losses. 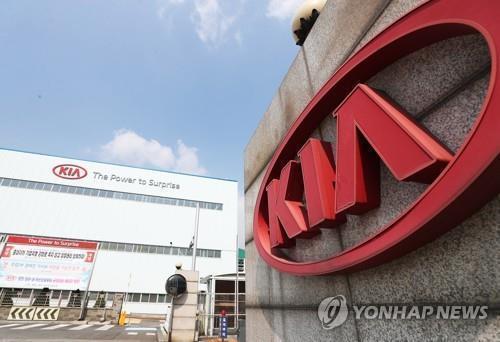 The 30,000-strong union demanded the company increase the monthly basic pay by 120,000 won (US$104) per person, offer 30 percent of its annual operating profit in performance-based pay, restore the 30-minute extra work system following an eight-hour shift and extend the retirement age from 60 to 65.

But the company proposed 1 1/2 months of merit-based remuneration, 1.2 million won in special COVID-19 allowance, 200,000 won in gift certificates and certain company stocks in lieu of freezing wages for the year, which was rejected by the union.

The union also asked the company to build a module components plant for electric and hydrogen vehicles inside Kia's existing plants, not in plants of parts affiliate Hyundai Mobis Co. It has expressed concerns about a possible reduction in the carmaker's assembly line workers due to Hyundai Mobis' plan to build an auto parts plant for the next-generation models.

Last month, the union criticized the company's decision to put aside 1.26 trillion won in provisions for the recall of the faulty Theta II gasoline direct injection (GDi) engine and quality-related expenses, which sharply drove down the company's third-quarter profits.

The company was expected to report an operating profit of 1.3 trillion won in the third quarter, but the reflection of the heavy provisions sharply drove down profits, the union said.

From January to September, Kia's operating profit plunged 45 percent to 784.85 billion won from 1.42 trillion won in the year-ago period due to the impact of the pandemic on production and sales.

Its vehicle sales fell 6.1 percent to 2.39 million vehicles in the January-November period from 2.55 million units a year ago due to weak demand amid the pandemic.