A total of 379 officers from the Army's Special Warfare Command were sent to 78 public health centers in Seoul and the surrounding areas to conduct diverse supporting roles, such as contact tracing, data management and transferring samples for virus tests for two months, according to the Army. 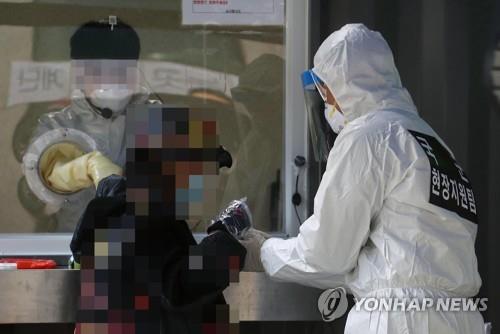 "A total of 486 officials and around 74 more medical personnel will be additionally sent to the testing centers this, and we are considering mobilizing more personnel, if necessary, in close consultations with health authorities," a ministry official said.

The decision came as the recent spike in the number of infections in the greater Seoul area has caused concern about a possible shortage of sickbeds, particularly for those with serious symptoms.

But the drop is believed to be owing largely to fewer tests conducted over the weekend.

Defense Minister Suh Wook presided over an emergency meeting with top commanders Monday and ordered the mobilization of all military assets available to best support the government's virus fight, according to his office.

"It is necessary to continue to enforce measures to stem the spread of the virus into barracks and at the same time get key personnel and guard troops ready to conduct their duties under any circumstances," Suh said.