"(Implementing) the Level 3 social distancing scheme is the last resort that we can choose, and it requires cautious deliberation, as it calls for confidence and social consensus on its effectiveness," Chung said during a government meeting of top officials in charge of dealing with the pandemic. 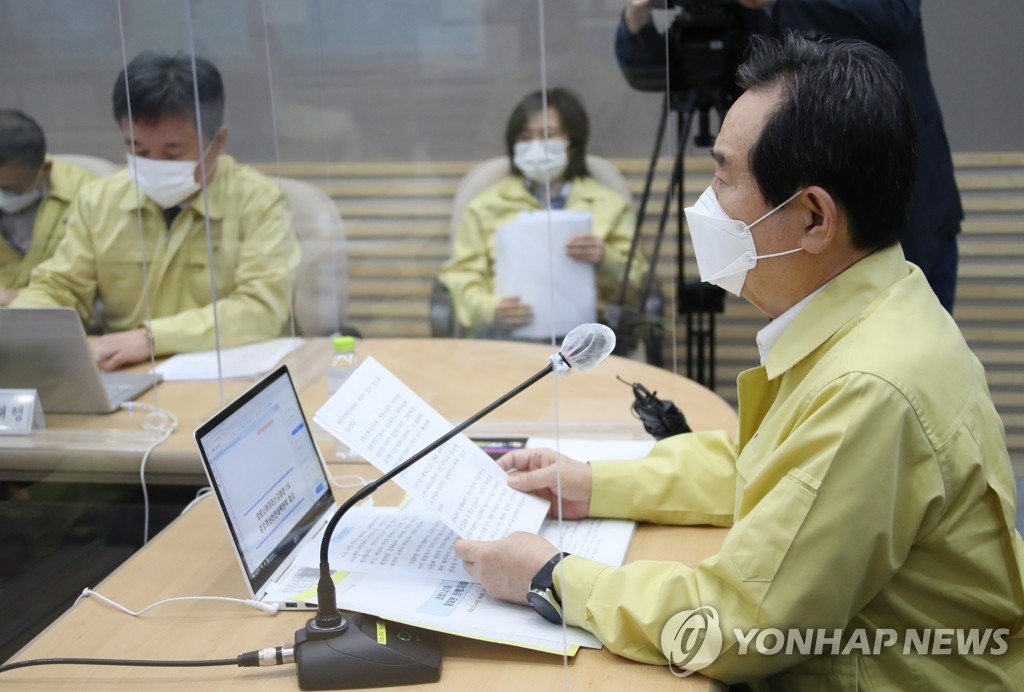 Calls have grown for the government to raise the distancing scheme to the highest Level 3 amid record-setting coronavirus case tallies over the weekend. On Sunday, the country added a record 1,030 daily cases, a day after adding 950, the biggest number since the country reported its first COVID-19 case in January.

South Korea operates a five-tier social distancing scheme, with the greater Seoul area currently under the second-highest Level 2.5 and the rest of the country under Level 2.

At the meeting held at Seoul City Hall, Chung said the government "won't hesitate in making a bold decision" when needed, and explained that authorities are sufficiently gathering opinions from involved ministries, local governments and experts.

Chung said what is important now is for the public to properly participate in the strengthened antivirus measures that are in place.

"Now more than ever, we must overcome the crisis by adhering to strict social distancing and practicing disease control guidelines," he said.

To directly oversee and supervise disease control measures in the capital area, Chung, who heads the Central Disaster and Safety Countermeasure Headquarters, will soon set up an office in the Seoul City Hall, the prime minister's office said.

The decision was made as over the past weeks, the country has reported hundreds of daily new cases mainly due to locally transmitted cases from the capital area encompassing Seoul, Incheon and Gyeonggi Province, which houses around half of the nation's population.

In February, Chung had also set up an office in the city hall of Daegu, 300 kilometers southeast of Seoul, to personally oversee the state and local antivirus measures during a mass outbreak in the city then.