(ATTN: RECASTS throughout with reaction from N. Korean defectors' group)

The revision to the Development of Inter-Korean Relations Act, billed as the anti-leaflet law, outlaws the scattering of leaflets critical of North Korean leader Kim Jong-un or his political system across the border.

The bill was passed during the National Assembly's plenary session in a 187-0 vote, one day after lawmakers of the conservative main opposition People Power Party (PPP) staged a filibuster to block its passage.

The two Koreas agreed to suspend leafleting and other hostile acts in the border area in the Panmunjom Declaration adopted by their leaders in 2018.

In June, Kim Yo-jong also demanded that South Korea legislate a law to stop the leafleting campaigns by what she condemns as "human scum."

In June, the North blew up an inter-Korean liaison office in its border town of Kaesong in anger over the sending of propaganda.

For years, North Korean defectors in South Korea and conservative activists have flown the leaflets to the North via balloons to help encourage North Koreans to eventually rise up against the Pyongyang regime.

North Korea has bristled at the propaganda campaign amid concern that an influx of outside information could pose a threat to its leader Kim Jong-un.

North Korea has repeatedly called for an end to the leafleting campaign. The issue has long been a source of tension between the two Koreas, which are still technically at war because the 1950-53 Korean War ended in a truce, not a peace treaty.

The opposition People Power Party protested against the bill, which it said would excessively limit the right to freedom of expression.

"Do balloons carrying leaflets contain cannonballs or poisons? In a bid to express opposition to the bill passage, we will continue to fly anti-Pyongyang leaflets," Park Sang-hak, head of Fighters for a Free North Korea, said.

Lee Min-bok, another activist, claimed that the assembly rammed through the measure even though the country could block the controversial launches under existing law.

"It's nothing but to show to Kim Jong-un that South Korea is doing something to deter the leaflet campaign," Lee said. 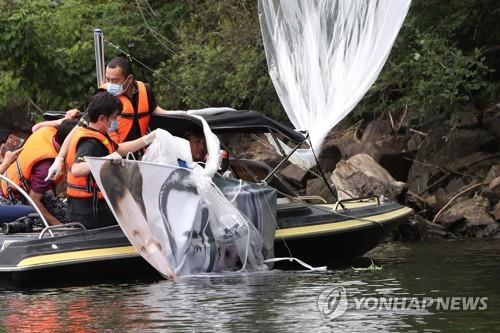