SEOUL, Dec. 14 (Yonhap) -- Prosecutors on Monday indicted a key broker on charges of fraud in connection with its investigation into an investment scam scandal at a private equity firm, judicial sources said.

They said the Seoul Central District Prosecutors Office charged Chung Young-je, the former CEO of Optimus Alternative Investment who is known as a key accomplice in the fund scam, with fraud.

The scandal surrounding Optimus Asset Management centers on allegations that the private equity company solicited funds worth about 1.2 trillion won (US$1.1 billion) from thousands of people for investments in public institutions but actually funneled most of the money into risky assets, causing huge losses to the investors.

Chung is suspected of swindling the Korea Communications Agency out of some 106 billion won in collusion with Kim Jae-hyun, the jailed Optimus CEO, from June 2017 to March 2018. They elicited the money from the public agency on a false promise that it would be invested in safe public corporate bonds.

Prosecutors also suspect Chung of taking 144 million won from a man surnamed Yoo, who is known as the architect of Optimus, in return for luring investment.

Meanwhile, the investigators have been chasing yet another suspect, surnamed Ki, who is at large. 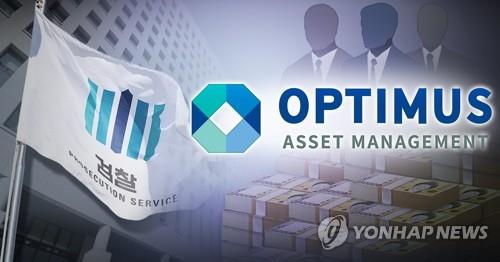