SEOUL, Dec. 15 (Yonhap) -- The interim leader of the main opposition People Power Party (PPP) offered an official apology Tuesday for two former presidents affiliated with the conservative party, who were convicted of corruption.

Kim Chong-in made the public apology during a press conference at the National Assembly, holding the party accountable for failing to keep the convicted former Presidents Park Geun-hye and Lee Myung-bak in check.

"Two former presidents of South Korea are simultaneously in a state of imprisonment," Kim said. "I am here to give an earnest apology to the people with regard to this issue."

"Our party could not fully accomplish its duty, as the then ruling party, to lead the country in the right direction, and committed the grave mistake of failing to detect and prevent problems by the reigning power," Kim said. "I bow deeply and give my apologies for the disappointment you may have felt."

Taking office as the caretaker leader of the PPP following its crushing parliamentary election defeat in April, Kim has been seeking to recover public trust in the party and lure back voters.

The conservative party saw its supporters, especially young or moderate voters, abandon the party after the two former presidents were convicted of corruption. 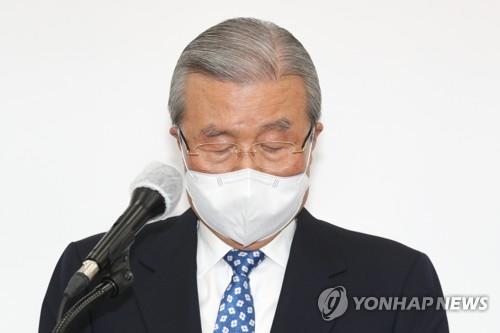 In her fourth year as president in 2017, Park became the first South Korean president to be ousted over a far-reaching corruption and influence-peddling scandal. She is currently serving a 20-year prison term delivered by an appellate court in July.

Lee, Park's predecessor, is also serving a 17-year prison term, after being convicted of corruption.

The incumbent PPP leader also took aim at President Moon Jae-in's liberal administration, saying, "I also feel responsible for the current state of politics, where democracy and the rule of law regressed."

He also pledged efforts to reform the party and reshuffle party personnel so that it "could be born again."

Kim's remarks mark the first official apology made by a leader of the biggest conservative party for the two former convicted presidents, as it is seeking to regain power in the upcoming presidential election slated for March 2022.

His apology, however, created a split within the PPP, with some party members openly voicing criticism.

Three-term Rep. Park Dae-chul, who is known to be close to Park, told Yonhap News Agency that the apology overlooked the political dynamics behind the former president's conviction.

"The apology would have been better left unsaid. ... There are complicated and various reasons behind a president's imprisonment, such as betrayal of one's party, fake news, distortion or instigation, but (the apology) just reduced them all down to a simple wrongdoing," the lawmaker noted.

Another party senior, Rep. Chung Jin-suk, however, hailed Kim's apology, casting it as the party's "pledge to the public to be born again through sincere remorse and soul-searching."