The kimchi-making event at the Habib House, the ambassador's official residence in Seoul, came amid Chinese media's claim that Beijing led the development of a global standard for the staple Korean dish.

"There're some pretenders out there, but I think there's nothing more Korean than kimchi," Harris said during the 25-minute event streamed live on Facebook by the Asia Society Korea Center.

Chef Lee Hye-jung said that Koreans first started eating kimchi 3,000 years ago, and that the current form of kimchi featuring various spices, including red pepper powder, came into existence about 600 years ago during the Joseon Dynasty.

A Chinese media outlet has claimed that Beijing had won a certification from the International Organization for Standardization (ISO) for its kimchi making process -- a charge immediately refuted by South Korea.

Seoul's agriculture ministry said that Beijing won ISO certification for "pao cai," another type of pickled vegetable consumed in China, which "has nothing to do with kimchi."

"It's great to have Chef Big Mama Lee here at the Habib House to teach me how to make uniquely Korean, world-renowned food, kimchi," Harris said. "I had no idea that all this went into making kimchi, which I eat not every day but almost every day." 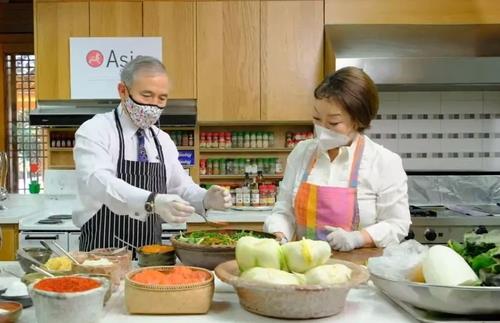