WASHINGTON, Dec. 16 (Yonhap) -- South Korean Foreign Minister Kang Kyung-wha on Wednesday defended the country's recent passage of a bill prohibiting sending anti-Pyongyang leaflets into North Korea, arguing that freedom of expression can be limited for the safety of people.

South Korea's ruling party-controlled National Assembly approved the leafleting ban Monday despite criticism that it undermines the right to freedom of expression and the country has given in to pressure from Pyongyang.

But the government has stressed that sending such leaflets could provoke the North to engage in bellicose behavior so as to endanger the safety of people living in border regions. Pyongyang has sharply protested such leaflets and even blew up an inter-Korean liaison office in anger earlier this year.

"This is happening in a very sensitive area -- the most militarized zone in the whole world with people living right next to the border area," Kang said in an interview with CNN.

Kang noted there was an argument that the ban on leaflet-sending may undermine the freedom of expression but insisted it will be within the legal boundaries of the International Covenant on Civil and Political Rights (ICCPR).

"Freedom of expression, I think, is absolutely vital to human rights, but it's not absolute. It can be limited," she told the interview.

"According to the ICCPR, we have to (do it) by law, (and) it has to be limited in scope. And it is limited in scope. It is only when these acts pose harm or pose danger to the life and the security of our people," she added.

Kang said in 2014, North Koreans had tried to shoot down balloons carrying such leaflets with "anti-aircraft artillery."

"So in an area, highly militarily tense area where anything can go wrong, lead to even bigger clashes, and the people living near the border have been asking that these activities stop for years," she said. 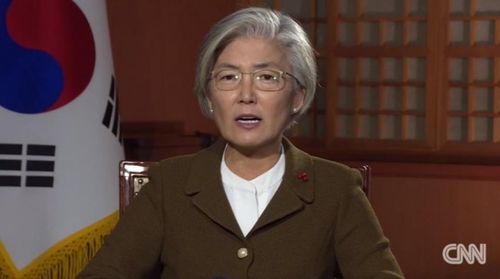 Asked about current conditions in North Korea with regard to the COVID-19 pandemic, the South Korean foreign minister said the "official story" was the North has had no confirmed case but cast doubts.

"Given that this is a virus that spreads very quickly, and even in countries that quickly closed down the virus got in and spread, it's hard to believe that there aren't any cases, but that's the official story," she said.

Kang said South Korea has offered to work with North Korea to help contain or prevent an outbreak, and that its offer still stands.

"But they have not replied to our offer of working together and assisting to fight this pandemic," she said.

"With the Trump administration, given his very unconventional style, I think that did pose a challenge to those of us who are more used to and comfortable with the more conventional style of doing diplomacy," she said.

"We disagreed on many things. We had arguments, but I think the nature of the relationship is such that we can really have a genuine discussion on issues that we don't agree on and move on," she said of Pompeo.

"Given the signals coming from the incoming team during the campaign, after the campaign, their remarks about the importance of the alliance, the importance of South Korea in their global scheme of things, I expect to have a very close, and very good working relationship with my counterpart, and our team and their team," she added.

President-elect Biden is set to be inaugurated on Jan. 20. He has named former Deputy Secretary of State Tony Blinken to be his first secretary of state.

FM says freedom of expression can be limited over leafleting ban

FM says freedom of expression can be limited over leafleting ban