SEOUL, Dec. 17 (Yonhap) -- South Korea's consumer prices are expected to grow at a faster pace in the next two years due to an economic recovery and rising rent, a central bank report said Thursday.

South Korea's consumer inflation is forecast to reach 1 percent in 2021 and 1.5 percent the next year, according to the report from the Bank of Korea (BOK).

The country's core inflation, excluding volatile food and energy prices, is projected to come to 1 percent and 1.3 percent in 2021 and 2022, respectively.

The BOK said South Korea's consumer inflation will likely expand further down the road in step with an improving domestic economy and an increase in international oil prices.

A recent uptick in home lease fees is also expected to put upward pressure on consumer prices, combined with the reduced downward pressure stemming from government policies, it added.

The forecasts are much higher than this year's consumer inflation. In the first 11 months of the year, South Korea's consumer prices rose 0.5 percent from the previous year, well below the central bank's target rate of 2 percent.

The central bank attributed this year's low consumer inflation rate to a decline in international crude prices due to the coronavirus pandemic and a slowdown in service fees.

The BOK further noted South Korea's rapid transition to the so-called digital economy would continue to apply downward pressure on consumer prices for the time being. 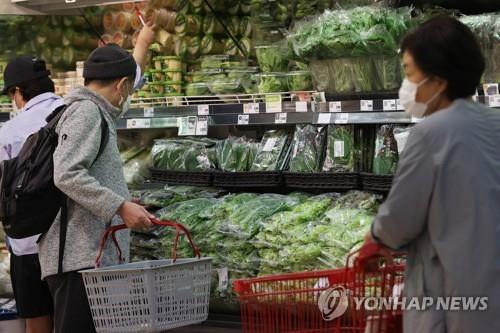