SEOUL, Dec. 18 (Yonhap) -- The year 2020 was defined by the devastating coronavirus pandemic that upended life, but it was also a remarkable year when the long pursuit of reforming the prosecution service finally bore fruit.

The liberal Moon Jae-in government finalized three major bills that mainly focused on curbing prosecutors' outsized power and diffusing it among other agencies -- the police and a new agency tasked with going after crooked government officials, including state prosecutors.

On Tuesday, President Moon hailed the passage of a series of related bills as "historic."

"Institutionalizing the reform of powerful agencies, which has been a long-cherished wish of South Korea's democracy, has finally been completed," he said during a Cabinet meeting. "It is such a historic occasion for the people who have suffered from ruined democracy and human rights abuses by powerful agencies."

He expressed high expectations for the launch of the Corruption Investigation Office for High-ranking officials (CIO), in particular, which was more than two decades in the making. 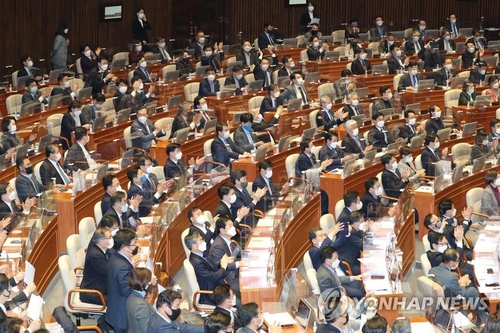 The prosecution, one of the most powerful yet also, according to many, most unreliable state agencies, was not considered up to the daunting task of ferreting out corruption among the establishment that includes prosecutors themselves.

Also, the public has had reservations about the willingness of prosecutors to vigorously investigate the entrenched, with whom they were too often seen as keeping cozy relations as part of efforts to protect their own sweeping power. South Korea's prosecutors have much greater power than their counterparts in most countries, with the authority to investigate crimes -- big or small -- and the exclusive right to decide who to indict.

The task of creating an agency, which is completely independent from political intervention and can act as a check and balance against the prosecution's enormous power, has often been bogged down in bipartisan wrangling and faced strong opposition -- not surprisingly -- from prosecutors.

The yearlong, exhausting tug-of-war between Justice Minister Choo Mi-ae and Prosecutor General Yoon Seok-youl is seen as a case in point.

The top prosecutor was appointed in July last year, amid great fanfare and hoopla, lauded by President Moon as a perfect person to spearhead prosecution reform and not to compromise his integrity in the face of political pressure.

Moon, in particular, asked him to "take a stern measure" if and when there was power abuse or corruption among the ruling Democratic Party (DP) and his office, Cheong Wa Dae.

To Yoon's supporters, that was exactly what Yoon did when the prosecution started investigating alleged financial malfeasance and nepotism of former Justice Minister Cho Kuk, a key ally of President Moon in his reform campaign. Cho resigned in October last year amid public anger over what was perceived as his hypocrisy of failing to practice what he had preached, among other things. His disgraced departure dragged down Moon's approval ratings.

Replacing Cho, Choo took office in January, pledging to tackle the unfinished job of reining in the prosecution's power more vigorously. Soon after taking over the ministry, she replaced senior prosecutors who were investigating Cho and his family in a major reshuffle.

The ensuing months have seen the tensions only escalate further between the two, despite the fact that both were appointed and asked by the president to work toward the shared, or so hoped by Moon, goal of reshaping the prosecution service.

On Wednesday, Moon endorsed the ministry's decision to suspend Yoon for two months over four counts of alleged misconduct, including the surveillance of judges hearing cases on former Justice Minister Cho and presidential officials' alleged involvement in the Ulsan mayoral election in 2018 to bring victory to one of Moon's longtime friends. The measure immediately went into effect, and Choo tendered her resignation the same day in an apparent attempt to ease the political burden on the president as her protracted feud with Yoon has been a factor behind Moon's declining job approval ratings.

Yoon also faced allegations that he wielded his power to unfairly intervene in probes to protect people close to him, including a senior prosecutor suspected of colluding with a former journalist to dig up dirt on a progressive commentator close to Moon. Yoon's own family -- his wife and mother-in-law -- have been investigated on various charges including stock manipulation and fraud.

None of the cases have resulted in convictions yet.

In July, a bill to establish the CIO finally took effect after twists and turns, but its launch has been put on hold amid political bickering over how to select its inaugural chief. Last week, the ruling party, by using its majority, passed a revision bill to effectively override opposition parties' veto power in the selection process. Opposition parties vehemently denounced the unilateral action, calling it "dictatorial."

President Moon emphasized that the launch of CIO was never a matter of "ideology or politics" but an issue that "has been discussed for more than 20 years in order to create a righteous country with no corruption." The agency is also "a tool to democratically regulate the prosecution," he added.

On top of the launch of CIO, the government counted reducing the scope of prosecution investigation as one of its important accomplishments this year.

Effective January 1, the scale and target of investigations handled by prosecutors will be limited to certain crimes such as financial irregularities as well as corruption by elected officials and police officers.

Setting aside the principles of dispersing state power and rooting out corruption, however, Moon's critics and opposition lawmakers have expressed concern that the CIO could turn into yet another all-too-powerful institution that is at risk of being abused by whoever is in power to harass political opponents.

Given that, it is no surprise that some conspiracy theorists have raised the possibility of Yoon, who has fallen out of favor with Moon, becoming the first target of a CIO investigation.

Another obstacle facing the Moon government is that many rank-and-file prosecutors have been antagonized by how their boss was pushed aside in what they viewed as a unilateral, ill-advised fashion.

The dramatic power struggle between the Moon government and the prosecution is also likely to continue for a while. On Thursday, the top prosecutor filed an injunction at the Seoul Administrative Court against his suspension, in a show of defiance and a possible sign that he, and the prosecution by extension, will not yield power easily -- not just yet.