SEOUL, Dec. 18 (Yonhap) -- South Korea held a ceremony Friday to honor a total of 514 sets of recently unearthed remains of soldiers killed during the 1950-53 Korean War, vowing to make every effort until the last remains are returned to loved ones.

The remains include 127 sets discovered during this year's excavation work on Arrowhead Ridge inside the Demilitarized Zone (DMZ), 147 sets repatriated from the United States in June, and others found in extensive operations across the country, according to the ministry.

Of them, 19 were identified and returned to their families. The remaining unidentified remains will be moved to the Agency for KIA Recovery and Identification under the defense ministry for further analysis, the ministry said.

"Currently, we have DNA samples from only 60,000 families. We will continue to work hard to discover remains and collect more DNA data for identification," the ministry said in a statement.

South Korea launched the excavation work in 2000 as it marked the 50th anniversary of the outbreak of the war. Since then, it has discovered around 10,000 sets of remains, with nearly 120,000 troops yet to be retrieved.

During the three-year war, 178,569 South Korean and U.N. soldiers were killed, and 42,769 others remain unaccounted for, according to government data. 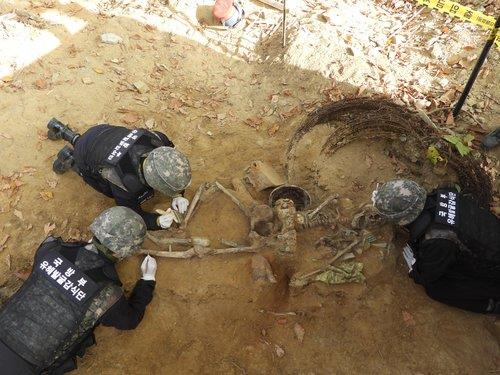