SEOUL, Dec. 18 (Yonhap) -- The incoming U.S. administration of Joe Biden should consider using the upcoming confirmation hearing for Secretary of State nominee Antony Blinken to publicly send a message that it is willing to engage North Korea in dialogue, an American expert said Friday.

Joel Wit, a senior fellow at the Washington-based think tank Stimson Center and founder of the 38 North website, made the case during a videoconference, pointing out the difficulty in seeking immediate talks due to the coronavirus pandemic.

"The secretary of state-designate will have to have hearings and will have to be confirmed and that will probably happen in mid-January, or maybe a little later than that," Wit said of the need to start a "messaging strategy" to the North.

Former Unification Minister Kim Yeon-chul also called on the incoming administration to have a flexible approach to sanctions against the North, saying that there were "shortcomings" in the Donald Trump administration's "rigid" approach in nuclear talks with Pyongyang.

"Sanctions are not a purpose but a means. It is a task for the Biden administration to use it flexibly," Kim said.

Kim also proposed holding four-party summit talks including China, pointing out that the bilateral relations between Beijing and Pyongyang have become closer than in the past both economically and politically.

Frank Januzzi, head of the Mansfield Foundation, agreed on the need to acknowledge the role of China in the peace process.

"The U.S. cannot devise a strategy for the Korean Peninsula that doesn't take Chinese equities into account ... because the Chinese can be a bad actor and they can undermine anything we're trying to accomplish if they're not involved and integrated into the process," Januzzi said. 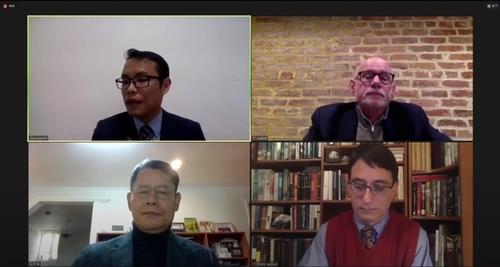