SEOUL, Dec. 18 (Yonhap) -- South Korea's human rights watchdog said on Friday that the Army's forced discharge of a sergeant who underwent a sex reassignment surgery while serving in the military was an infringement of human rights by a public authority.

The National Human Rights Commission of Korea (NHRCK) said its plenary meeting held Monday concluded the Army's decision in January not to allow Byun Hee-soo, then a staff sergeant, to continue to serve in the military as a female soldier had no legal grounds. 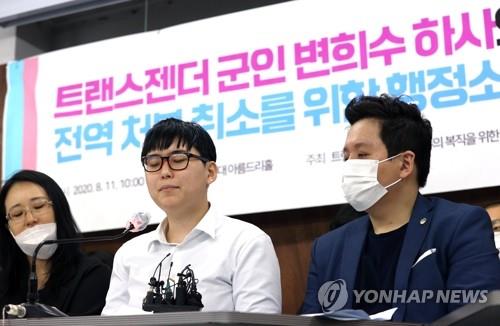 The NHRCK's opinion came after the Center for Military Human Rights Korea, a civic group, had filed a petition alleging Byun's forced military discharge was a discrimination against transgender people.

Byun's case drew extensive media attention at home and abroad because she was the first South Korean active-duty soldier to have sex reassignment surgery while in service.

The Army made the discharge decision after judging that Byun's loss of male genital belongs to the Level 3 physical disability under the military laws.

The majority of NHRCK plenary meeting members reportedly shared the view that the Army's discharge decision for Byun was unlawful because there is no legal basis for applying physical disability ratings to transgender people.

They are also said to agree to the view that Byun is not included in the case of physical disability, since she underwent the sex reassignment surgery not because of an accident but because of her gender identity.

According to NHRCK officials, Byun's case was first discussed in the commission's October plenary meeting from the perspective of discrimination against transgender people before being rediscussed this month as a case of human rights violation.

They said the commission is expected to deliver its final opinion on Byun's case to the defense minister and the Army chief of staff, and recommend they revise the relevant regulations and systems.