SEOUL, Dec. 18 (Yonhap) -- A group of major indoor heritage sites in the greater Seoul area will stay closed due to concerns about the spread of COVID-19 in the capital area, the state heritage agency said Friday.

The Cultural Heritage Administration (CHA) said the indoor heritage facilities, including the National Palace Museum of Korea in central Seoul, will remain out of service until further notice.

Following their previous suspension due to the pandemic, the indoor facilities were set to reopen Saturday, but CHA decided to keep them closed due to concerns over the recent hikes in virus cases, especially in the capital area, CHA said.

The affected facilities include Seokjojeon and Jungmyeongjeon of Deoksu Palace and the Grand Greenhouse of Changgyeong Palace, both in central Seoul, as well as three Joseon-era royal tomb sites outside of Seoul.

CHA said, however, other outdoor heritage facilities, such as Gyeongbok, Changdeok and Deoksu Palaces in Seoul and open-air royal tomb sites from the Joseon Dynasty (1392-1910) in the surrounding Gyeonggi Province will be open to visitors.

As part of efforts to prevent the spread of the virus, guided tour services will be suspended at those facilities, it added.

The reopening schedule of the indoor public facilities will be posted on their official websites once decisions are made, according to CHA.

On Friday, the country added 1,062 more COVID-19 cases, including 1,036 local infections, raising the total caseload to 47,515. Most of the new infection cases were from the greater Seoul area, according to the Korea Disease Control and Prevention Agency. 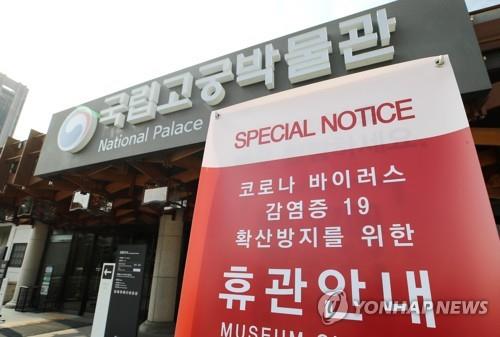