SEOUL, Dec. 19 (Yonhap) -- At the heart of Seoul is Jongchinbu, a historic building that was used as the headquarters of an office overseeing royal family affairs during the Joseon Dynasty (1392-1910).

The building, which had been relocated to several different places near the royal palace of Gyeongbok, returned to its original spot less than 10 years ago when the National Museum of Modern and Contemporary Art (MMCA) was being built.

The MMCA has recently opened a new outdoor exhibition there, filling the centuries-old venue with modern art. 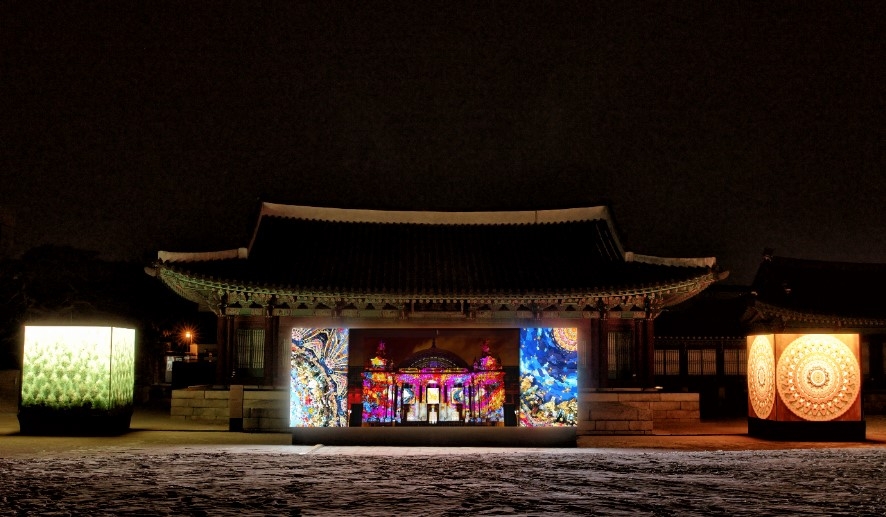 Two media artworks by artist group col.l.age+ fill a giant LED screen, measuring nine meters in length, and an LED cube that light up daily from 10 a.m. to 9 p.m.

The 2016 work "Hypnagogia" was inspired by Chinese philosopher Zhuangzi's fable "Butterfly Dream." The colorful piece explores contrasting concepts like light, darkness, present and future through illuminations of human eye-shaped figures that make up a giant butterfly.

"Super Nature" (2020) is a more socially conscious work. Through images reflected on an LED light cube, it quizzes visitors on themes like environmental pollution and the relationship between mankind and nature, according to the museum. "It is the first exhibition at the cultural heritage space, which is within the museum venue but was not being utilized," said Youn Bummo, director of the MMCA, adding that the museum will showcase new projects that highlight the spatial and historic context of Jongchinbu.

The outdoor exhibition will remain open until Dec. 27. Currently, the museum's other indoor programs remain suspended in line with the government's toughened social distancing guidelines.

This is not the first time that Jongchinbu has been featured in modern cultural works. In October, K-pop singer-songwriter CL filmed her performance for "The Late Late Show with James Corder" at the historic venue.