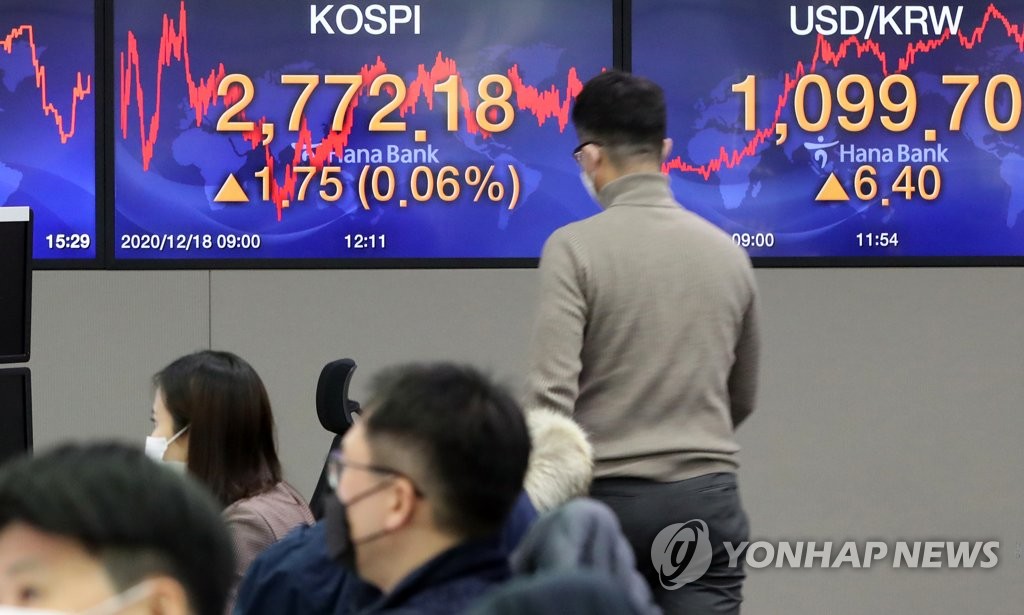 The benchmark index rebounded from the previous session's fall tracking overnight gains on Wall Street as U.S. lawmakers continued negotiations to clinch a deal for a new stimulus package.

"Major indices in the United States all rose to reach record highs after reports of stimulus talks being close to an agreement," Eugene Investment & Securities analyst Huh Jae-hwan said. "Gains were, however, limited on the possibility that the talks may continue into the weekend."

Investor sentiment was also boosted after Moderna said its COVID-19 vaccine received recommendation for emergency use by an expert panel to the U.S. Food and Drug Administration.

The recent surge in COVID-19 cases in South Korea, however, limited the index's gains.

While authorities have stopped short of adopting the strongest social distancing measures, which would place the country in a quasi-lockdown, the country reported over 1,000 new coronavirus cases for the third day in a row.

The local currency closed at 1,099.7 won against the U.S. dollar, down 6.4 won from the previous session's close.

Bond prices, which move inversely to yields, closed higher. The yield on three-year Treasurys fell 3.6 basis points to 0.963 percent, and the return on the benchmark five-year government bond lost 2.2 basis points to 1.345 percent.