SEOUL, Dec. 18 (Yonhap) -- A group of 17 civic organizations on Friday issued a joint statement decrying criticism from some quarters of the United States of a recently legislated ban on sending anti-Pyongyang leaflets into North Korea as "interference in internal affairs."

The group, including the Korean Council for Reconciliation and Cooperation, stressed that flying propaganda leaflets has nothing to do with freedom of expression but is an "act that foments conflict."

"The interference in internal affairs by related U.S. organizations and politicians, which financially and politically sponsored the sending of leaflets to the North, is going too far, as they joined hands and criticized the passage of the bill," the joint statement read.

"They should stop the interference that undermines the vision for peace on the Korean Peninsula and inter-Korean reconciliation and cooperation," it added.

Also in the joint statement, the civic groups called on the Seoul government to quickly promulgate the legislation and try to stop people from sending additional leaflets into the North before the law goes into effect next year.

On Monday, the National Assembly, controlled by the ruling Democratic Party, passed the bill penalizing the sending of propaganda leaflets despite strong objections by conservative opposition lawmakers.

The ruling party has defended the legislation as necessary to enhance the security of residents in border regions and prevent needless political tensions with the North.

U.S. politicians and others have rebuked the legislation, claiming it could erode freedom of expression and block one crucial avenue for sending free-world information into the reclusive country.

In particular, Tomas Ojea Quintana, U.N. special rapporteur on human rights in the North, has called for South Korea to reconsider the legislation before it goes into effect. Seoul's unification ministry has expressed regret over the demand, saying the ban was legislated according to due democratic procedures.

On Thursday, U.S. Congressman Gerald E. Connolly, a co-chair of the Congressional Caucus on Korea, urged President Moon Jae-in to seek "critical revisions" to the bill before signing it, warning it could have a "chilling effect" on freedom of expression.

"In its current form, this legislation could harm the ability of Korean human rights organizations to disseminate independent and diverse information to the North Korean people," he said in a statement. 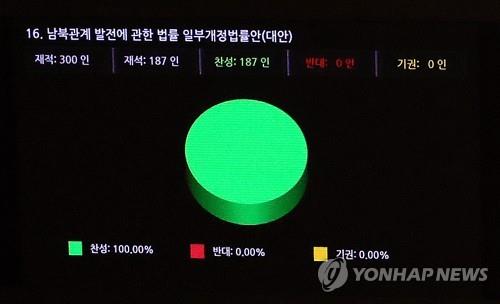