The country added 1,053 more COVID-19 cases, including 1,029 local infections, raising the total caseload to 48,570, according to the Korea Disease Control and Prevention Agency (KDCA).

It is the first time that the daily number has stayed above 1,000 for four straight days. After reaching a record high of 1,078 on Wednesday, the daily caseload inched down to 1,014 the following day and then bounced back to 1,062 on Friday. 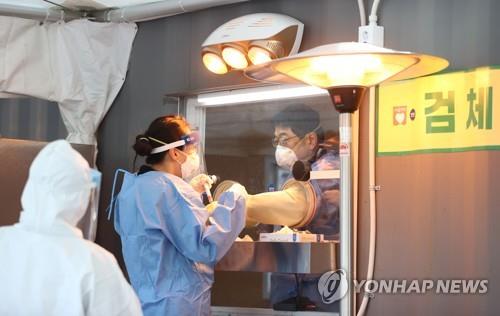 Cluster infections have been breaking out across the country, with senior care hospitals, religious facilities and offices hit particularly hard.

Of the locally transmitted cases, more than 70 percent were from the greater Seoul area, which is home to around half of the country's population of more than 50 million.

The capital city of Seoul reported 384 new cases Saturday, and the surrounding Gyeonggi Province and the western city of Incheon had 278 and 46 additional patients, respectively.

The continued surge in new cases has caused the shortage in hospital beds for COVID-19 patients.

In Seoul alone, around 580 patients were waiting to be admitted to hospitals as of Friday, according to the municipal government.

South Korea has 573 beds for seriously ill patients across the nation, but only 48 of them, or 8.4 percent, were unoccupied as of Friday.

So far this month, six patients have died of the disease while waiting to be admitted to hospitals, and the figure is feared to grow as the number of critically ill patients has been rising faster than before.

The number of seriously or critically ill COVID-19 patients came to 275 Saturday, up 29 from the previous day.

The KDCA reported 14 additional deaths, raising the total to 659.

The government has been scurrying to mobilize all resources available and to partner with private medical institutions to prepare more beds to prevent additional fatalities.

It issued an administrative order Friday dictating private hospitals set aside a certain portion of their intensive-care beds for serious COVID-19 cases, according to officials. It is the first time the government has issued such an order. 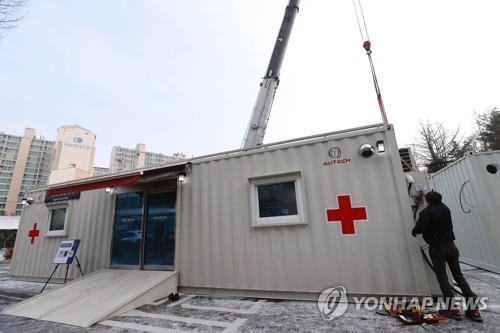 "Our data shows that one patient now affects around 1.2 individuals. We are also conducting tests in an aggressive manner to find more infections. So, we expect the daily number of this size to continue for some time being," Lim Sook-young, a senior health official, said during a regular press briefing.

Over the past two weeks, 11,162 were newly infected, and 26.9 percent of them had unknown transmission routes, according to the authorities.

So far, 131 makeshift test centers have been set up in the greater Seoul area, and 286 individuals tested positive through the random testing there, including 116 patients reported Saturday.

The resurgent pandemic has led the government to review raising the antivirus scheme to the highest Level 3 in the five-tier system.

The Level 2.5 social distancing guidance has been in place in the greater Seoul area since last week, but it has failed, at least for now, to stop the spreading virus.

Level 3 can be adopted when locally transmitted cases hover between 800 and 1,000 for a week or the daily tally doubles from the previous day. The recent tally has already met the requirements, as the KDCA said that an average of 976.4 daily new cases occurred over the past week.

As the tougher scheme is expected to have far-reaching impacts on the economy, the government has been very careful, saying it will prioritize the implementation of the current antivirus measures more thoroughly and enforce additional measures at specific, vulnerable facilities.

Starting Saturday, all poker pubs were ordered to shut down for 10 days, after more than two dozen infections were linked to such bars in the multicultural district of Itaewon in Seoul.

The government also plans to have ski resorts located outside the capital area close after 9 p.m. A ski resort in the eastern county of Pyeongchang caused a chain infection that has affected at least 17 people so far.

"This weekend will be a crucial moment in judging whether to adjust the social distancing level," Prime Minister Chung Sye-kyun said during a meeting at the Central Disaster and Safety Countermeasure Headquarters on Saturday.

Pointing to a near fivefold increase in the number of infections at religious facilities over the past few weeks, Chung appealed to the people to adhere to antivirus guidelines particularly ahead of the Christmas and New Year's holidays.

Imported cases came to 24, mainly from the United States and Asian countries, excluding China, according to the KDCA.

The number of people released from quarantine after making full recoveries came to 352, raising the total to 34,334. 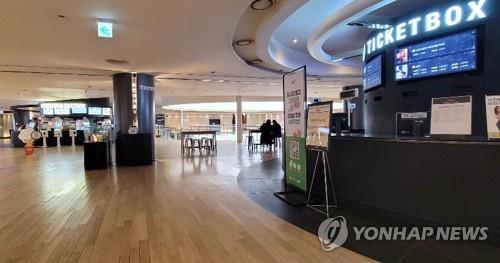