SEOUL, Dec. 21 (Yonhap) -- Former U.S. Defense Secretary James Mattis was chosen as the recipient of a South Korean government award for his contribution to the security of the Korean Peninsula and the bilateral alliance, the defense ministry said Monday.

Mattis, who served as the top U.S. defense official between 2017 and 2019, will receive this year's Paik Sun-yup Award, which was named after the best-known South Korean hero of the 1950-53 Korean War. He is the eighth recipient.

"He played a pivotal role in managing the security situation on the Korean Peninsula in 2017, when tensions ran high, which helped set conditions for the Korea peace process," the ministry said in a statement.

Mattis also "presented a blueprint for a staunch combined defense mechanism after the envisioned transfer of wartime operational control (OPCON) by signing the 'Alliance Guiding Principles' in 2018," the ministry added.

The guideline contains a set of commitments, such as the U.S. pledge not to withdraw its forces from Korea. The two countries have been working for the OPCON transition of South Korean troops from Washington to Seoul.

The award ceremony was supposed to be held in October during the Korea-U.S. defense ministers' meeting, but it was rescheduled early next year due to the new coronavirus.

Mattis expressed his intention to donate prize money to a project to build a memorial wall in Washington to commemorate U.S. veterans who fought in the Korean War, according to the ministry.

The war broke out on June 25, 1950, when North Korean troops, backed by the Soviet Union, invaded the South. The U.S. and 20 other allied countries fought alongside South Korea under the United Nations flag, while China helped North Korea.

It ended in a truce, not a peace treaty, leaving the two Koreas technically in a state of war. 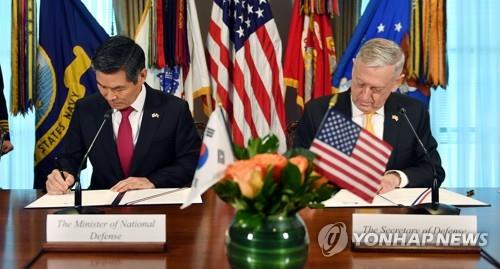