The country's 5G download speed stood at an average 351.2 Mbps, followed by Saudi Arabia at 272.8 Mbps and Taiwan at 247.7 Mbps, industry tracker Opensignal said in a report, citing data collected between Sept. 1 and Nov. 29 in 15 global markets with 5G networks.

The result marks an improvement for South Korea from a previous report by Opensignal in October, which had found the country's 5G download speed as the world's second fastest after Saudi Arabia. 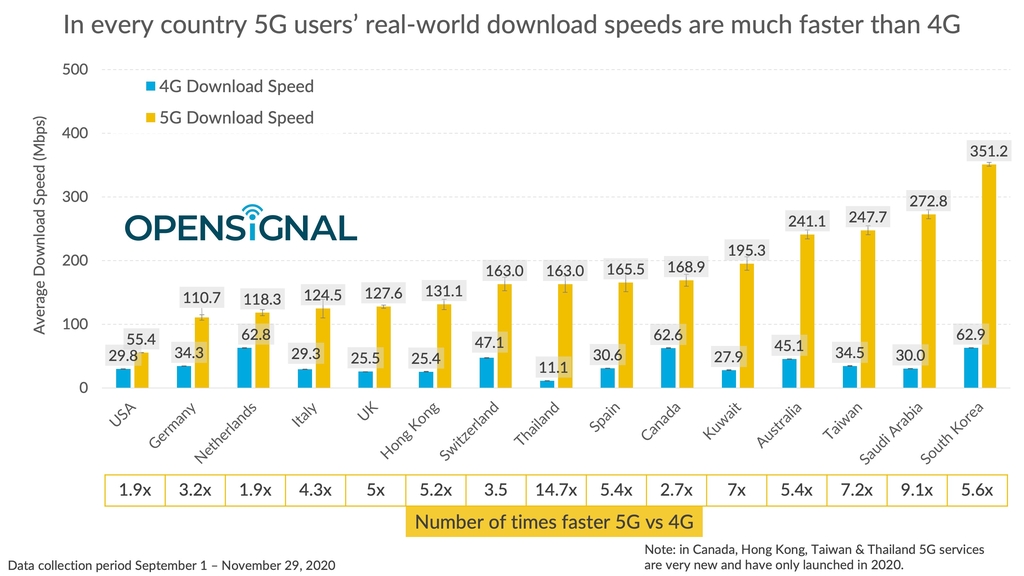 South Korea was the first country to commercialize the latest generation network in April last year and has racked up just under 10 million 5G users as of end-October, accounting for 14 percent of the country's total 70 million mobile subscriptions.

The time South Korean 5G users spent connected to the network, however, stood at 24.6 percent, behind Kuwait at 29 percent and Saudi Arabia at 27.8 percent, according to the Opensignal report.

South Korea has yet to commercialize the standalone version of 5G, requiring support from past generation networks, such as 4G LTE.

The country's three major mobile carriers promised earlier this year to spend up to 25.7 trillion won (US$23.3 billion) until 2022 to update network infrastructure and establish nationwide 5G coverage.