One Navy officer stationed in the eastern city of Donghae was confirmed to have been infected following an infection of his family member, and one of his colleagues at the same unit also contracted the virus, according to the ministry.

One Army officer in the border city of Paju tested positive after undergoing a test upon returning from vacation. Contact tracing is under way, the ministry said.

One soldier in Paju and a civilian worker for an Air Force unit in the southeastern city of Daegu also tested positive following their family members' infection, according to the ministry.

The latest cases brought the total number of COVID-19 infections among the military population to 488.

Currently, 880 service members are in isolation in accordance with the health authorities' guidelines, and the military has quarantined an additional 3,766 people under stricter antivirus schemes of its own as a preventive step, according to the ministry.

Nationwide, the country added 869 more COVID-19 cases, including 824 local infections, raising the total caseload to 51,460, according to the Korea Disease Control and Prevention Agency (KDCA). 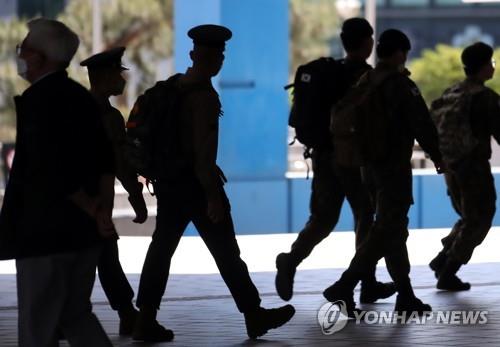