WASHINGTON/SEOUL, Dec. 22 (Yonhap) -- The U.S. State Department on Monday underscored the importance of getting outside information into North Korea in its first official comment on South Korea's recently legislated ban on sending anti-Pyongyang leaflets across the border.

"With regards to the DPRK, we continue to campaign for the free flow of information into the DPRK," a State Department spokesperson told Yonhap News Agency in response to a question regarding the leafleting ban. "As a global policy, we advocate for the protection of human rights and fundamental freedoms."

Critics have claimed that the ban undermines the right to freedom of expression.

But the South Korean government has argued that the legislation is necessary to protect the lives and safety of residents living in the border areas because such leaflets could provoke the North to undertake bellicose acts, such as opening fire to shoot down leaflet-carrying balloons.

The bill's passage earlier this month came after years of strong protests from Pyongyang, which in June even blew up a joint liaison office with South Korea in its border town of Kaesong in anger over such leaflets.

The State Department earlier refused to offer any official comments, directing related questions from Yonhap to the Seoul government.

Still, news reports have said Deputy Secretary of State Stephen Biegun had "privately" relayed U.S. concerns over the move to prohibit anti-North Korea leaflets during his recent visit to Seoul.

"We continue to work with our partners in the NGO community and in other countries to promote North Koreans' access to information," the spokesperson said.

Commenting on the State Department's response, Choi Young-sam, the spokesman for South Korea's foreign ministry, stressed that the legislation at issue is the "necessary, minimal" restriction to protect citizens in border regions.

"We have been contacting and communicating with the U.S. government, the Congress and related civic groups," Choi told a regular press briefing.

"During the contact and communication, we intend to explain the purpose of the revised law and explain that it is the necessary, minimal restriction required to protect the lives and safety of our citizens," he added.

The spokesperson also said the act of scattering anti-North Korea leaflets in a third country is not subject to the law in question.

Anti-Pyongyang leafleting activities are carried out by activist groups.

It was not clear whether any of those groups have received direct funding from the U.S. government, but Washington often provides funds to many activist groups in South Korea and other countries, including China, that work to promote North Korean human rights and those of North Korean defectors.

South Korean Foreign Minister Kang Kyung-wha has said that the bill, once enacted, may limit the freedom of expression for some, but she insisted it was a necessary, as well as legal, move to ensure the safety of those who live close to the border.

"This is happening in a very sensitive area -- the most militarized zone in the whole world with people living right next to the border area," Kang said in a recent interview with CNN.

"Freedom of expression, I think, is absolutely vital to human rights, but it's not absolute. It can be limited," she added. 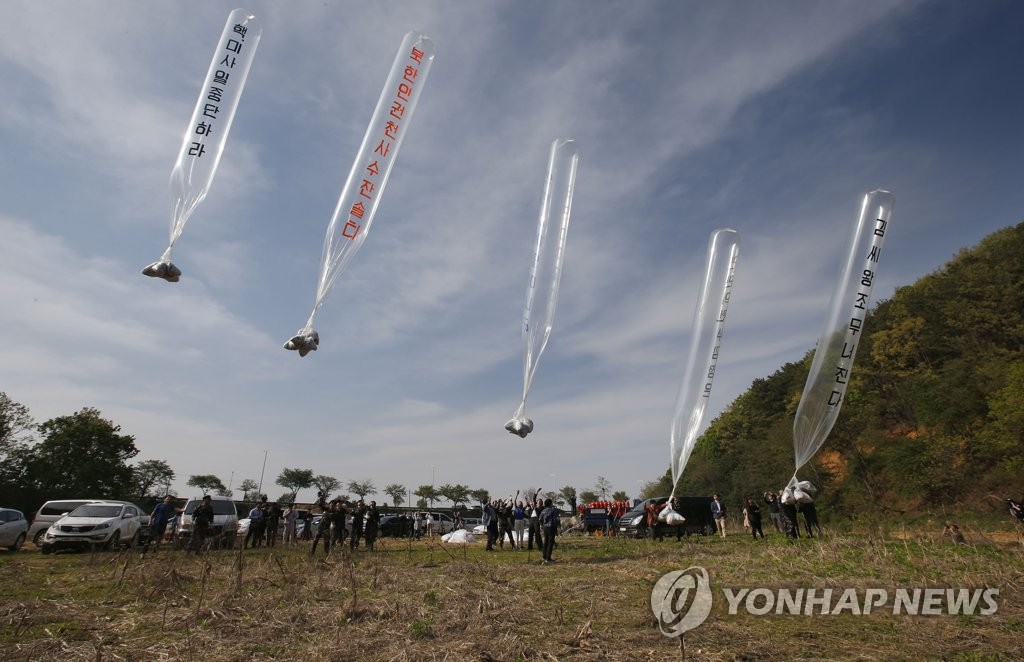