SEOUL, Dec. 22 (Yonhap) -- The incoming U.S. administration of Joe Biden could seek dialogue with North Korea next year rather than focusing on sanctions, though a nuclear deal between the countries is unlikely in the year, a local think tank said Tuesday.

In its 2021 forecast for international affairs, the foreign ministry-affiliated Institute of Foreign Affairs and National Security (IFANS) predicted South Korea's renewed role in facilitating dialogue between Washington and Pyongyang and preventing the North's possible provocations.

The institute released a summary of the annual forecast, which is set to be released on its website on Wednesday. It touched on various topics, including next month's launch of the Biden administration and its geopolitical implications. 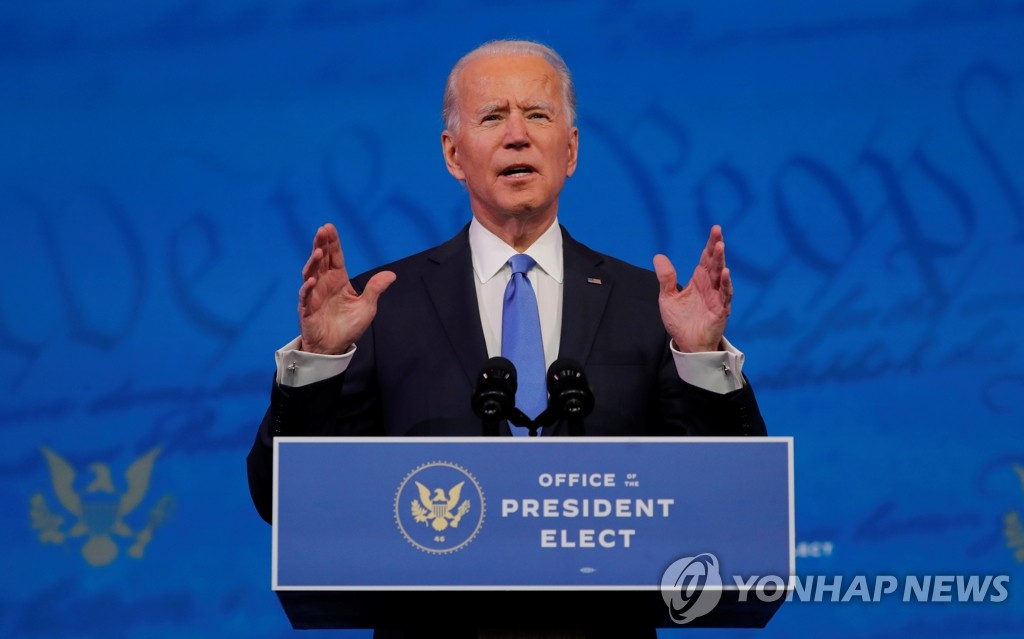 "In 2021, chances are high that rather than focusing on sanctions pressure against the North, the U.S. administration would complete its policy review at an early date and explore opportunities for dialogue with the North," the summary read.

"While focusing on efforts to stem the COVID-19 pandemic and its economic management, North Korea is forecast to refrain from nuclear and missile provocations for the time being and watch U.S. responses," it added.

The institute also said that in the latter half of next year, Washington might seek early-stage nuclear negotiations with Pyongyang under its "phased denuclearization strategy." It did not elaborate on the strategy but appeared to refer to Biden's apparent inclinations toward a step-by-step approach to the North's nuclear quandary.

"But it is difficult to anticipate a nuclear agreement within the year due to the countries' differences, and twists and turns like the suspension of talks are expected," the institute said.

On cross-border relations, the institute pointed out that in the short term, the two Koreas may find it difficult to improve their ties due to the spread of COVID-19, and warned that a springtime South Korea-U.S. military exercise could dampen efforts for inter-Korean reconciliation.

"Especially around the time of the North's Workers' Party's eighth congress in January, the North would focus on domestic politics, and if a South Korea-U.S. exercise takes place in March, it would not be easy to enhance inter-Korean relations," the institute said.

"But in the long term, as the COVID-19 spread flats off across the world, and if the Biden administration affirms its will for the resumption of nuclear negotiations with the North, inter-Korean ties are forecast to improve," it added.

On the Sino-U.S. rivalry, the institute forecast that the Biden administration may pursue competitive policies regarding China but would seek regional stability through "economic and diplomatic engagement" with the Asian rival.

The incoming U.S. government may also seek to strengthen alliances and multilateral cooperation over regional security, trade rules and technological leadership to keep an assertive China in check, and call for closer cooperation with South Korea along the line, the institute said.