The Seoul Central District Court handed down the jail sentence, together with a fine of 500 million won (US$451,000) and a forfeit of 140 million won, to Chung Kyung-sim, the wife of the former presidential secretary for civil affairs and a close aide to President Moon Jae-in.

The court also ordered the immediate imprisonment of Chung. 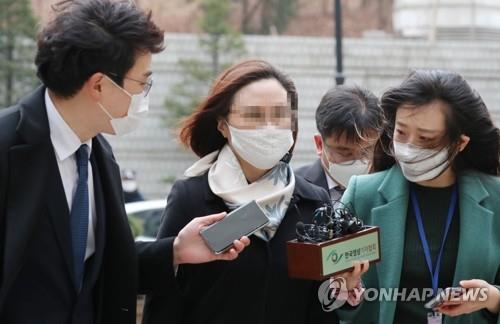 Chung, 58-year-old professor of Dongyang University, was indicted in November last year on 15 counts of charges related to her daughter's college admission and her dubious investment in a private equity fund (PEF).

Chung is accused of being involved in fabricating documentation from 2013-2014, including a college presidential citation, in order to get her daughter admitted to medical school. She was also charged with investing in the PEF using somebody else's name to bypass the code of ethics for public officials and embezzling around 150 million won through a bogus consulting contract.

The court found Chung guilty of all charges related to academic fraud and some financial misconduct charges.

The court said Chung colluded with her husband to forge an internship certificate for their daughter, falsely claiming she participated in an international academic conference held at Seoul National University (SNU) Law School in May 2009.

Cho also participated in the forgery of a certificate about his daughter's internship at a Busan-based hotel, which was used for her university admission, it said.

The court also said it is sufficiently recognized that Chung forged a Dongyang University presidential citation for her daughter's college admission. It ruled that Chung obstructed the admission procedures of the SNU medical school by submitting fabricated qualifications and documents.

"The defendant has never admitted to her misconduct and inflicted mental pain on those who tell the truth. The nature of her crimes is serious, and her daughter gained some actual benefits in admission procedures, leading to unfair results for other unsuccessful candidates," the court said.

It said she is strongly blamed for creating negative consequences that betray society's belief in and expectations for the school admissions system.

Chung was also suspected of having been involved in the destruction of evidence by instructing her asset manager to conceal her office PC and delete PEF-related documents.

But the court said she cannot be punished for charges related to destruction of evidence and embezzlement of PEF money.

The court only found her guilty of committing illegal PEF investments using undisclosed information, earning profits from the investments and opening a false name account to conceal her assets, saying such acts are a grave crime that disrupts the market order.

Throughout court hearings, Chung denied all allegations against her, arguing that academic records of her daughter were just overstated instead of being fabricated and her PEF deal was not an investment but a simple loan.

Chung was released from nearly seven months of detention in May after the Seoul court decided not to extend her arrest.

In the previous hearing on Nov. 5, prosecutors demanded a prison term of seven years, a fine of 900 million won and a forfeiture of 160 million won for Chung.

Cho, who resigned as justice minister in October last year after just one month in office, was also indicted later on a dozen charges, including bribery, in connection with his daughter's academic credentials and school scholarship, as well as his family's suspicious private equity investments.

Chung immediately expressed her will to appeal her case through her lawyer.

"We're very embarrassed at today's ruling," lawyer Kim Chil-joon said, regretting that it seems to contain a lot of prejudgment, speculation and prejudice.

Cho also reacted to the ruling, saying he was greatly shocked.

"The acquittal related to the PEF embezzlement charge is fortunate. Perhaps this ordeal has become an inevitable fate after I was nominated as a minister," Cho said in a social media post, vowing to fight further in a higher court.