The draftees entered the Army boot camp in the central city of Nonsan earlier this week but were transferred to civilian hospitals after testing positive for COVID-19 on Wednesday, according to the ministry.

All new enlistees are required to take COVID-19 tests.

The latest cases are not included in the military's own statistics of virus cases, as newcomers earn status as military members one week after joining a boot camp.

All able-bodied South Korean men must serve about two years in the armed forces.

Among military members, a Navy officer stationed on the southern island of Jeju tested positive, bringing the total number of COVID-19 infections at the barracks to 491.

He underwent a test after coming into close contact with his friend who was earlier confirmed to have been infected, according to the ministry.

Currently, 898 service members are in isolation in accordance with the health authorities' guidelines, and the military has quarantined an additional 4,208 people under stricter antivirus schemes of its own as a preventive step, according to the ministry.

Nationwide, the country added 985 more COVID-19 cases, including 955 local infections, raising the total caseload to 53,533, according to the Korea Disease Control and Prevention Agency (KDCA). 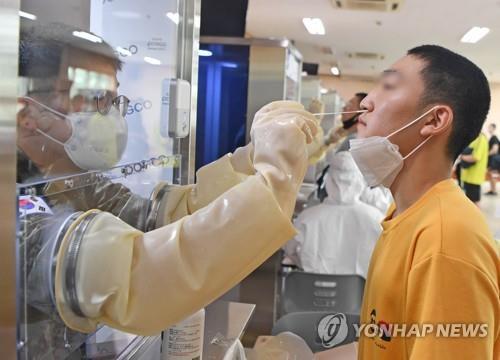