SEOUL, Dec. 24 (Yonhap) -- South Korea aims to reduce its plastic waste by 20 percent by 2025 by scaling down the output of plastic products and increasing the recycling rate, the Ministry of Environment said Thursday.

Under the ambitious environmental policy goal approved in an interagency policy coordination meeting, the nation also aims to raise its plastic recycling rate from the current 54 percent to 70 percent by 2025, the ministry said. 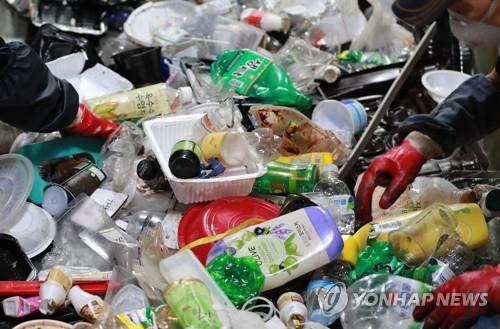 In the longer term, its greenhouse gas emissions caused by plastics will be lowered by 30 percent by 2030, while petroleum-based plastics will be entirely replaced by bioplastics by 2050 to pave the ground for a plastic-free society, the ministry said.

The government also aims to bring down the ratio of plastic containers in all container products from the current 47 percent to 38 percent by 2025.

Thus, the thickness of plastic containers for food delivery will be regulated depending on the type of food and container. Single-use plastic bags currently banned at large retailers and supermarkets will be entirely prohibited in all businesses by 2030, the ministry said.