SEOUL, Dec. 27 (Yonhap) -- South Korea decided to extend the current social-distancing restrictions in the greater Seoul area until Jan. 3, opting not to raise them to the toughest level, despite the winter wave of the novel coronavirus, officials said Sunday.

Health Minister Kwon Deok-cheol announced that the Level 2.5 distancing, the second highest in the country's five-tier COVID-19 alert system, will remain in effect in the nation's capital area, which covers Seoul, Incheon and Gyeonggi Province.

Although the nation's daily new virus cases have hovered around 1,000, the government aims to bring the winter wave under control without raising virus curbs to the toughest level because it would deal a severe blow to millions of small merchants.

In the rest of the country, Level 2 restrictions, the third highest level, will be applied until Jan. 3, officials said.

As for a reason why the authorities decided to retain the current distancing level, they cited recent daily tallies hovering steadily around 1,000 and a decrease in people's weekend movements since the rollout, on Thursday, of strict antivirus measures, such as a ban on gatherings of more than four people.

The authorities also pointed out that the virus reproduction rate in the capital area decreased to 1.07 from 1.27 recorded the previous week -- a development that authorities said marked a positive sign for the fight against the pandemic.

"We are responding to the pandemic by continuously supplementing quarantine and medical response capabilities and it is difficult to characterize the current situation as having reached a limit," Kwon told a press briefing.

"While watching the situation over the next one week, we will carry out a comprehensive review of all social distancing measures and make adjustments before Jan. 3," the official added.

Kwon also urged citizens to "persevere" and avoid private gatherings, stressing that the country is still in a "precarious crisis."

Under the Level 2.5 restrictions, gatherings of more than 50 people are banned, but the government has already enforced more stringent antivirus measures, including a nationwide ban on private gatherings of five or more people, since last Wednesday.

The measure to extend the current distancing level included toughened steps, such as barring fast-food chains from offering tables to customers buying only beverages or dessert under Level 2 or higher.

The move came as franchise cafe operators complained that hamburger joints and other fast-food restaurants have been allowed to seat customers at tables while only takeaway and delivery services were allowed for cafes.

Shortly before health authorities announced the extension of tougher distancing rules on the greater Seoul area, Prime Minister Chung Sye-kyun indicated that the government is likely to stick to the current level.

"The special measure that we are already implementing includes steps that are even tougher than that of Level 3 social distancing," Chung said during an interagency meeting on the COVID-19 response. "I once again earnestly call on people to continue to join in and cooperate with (anti-virus measures)." 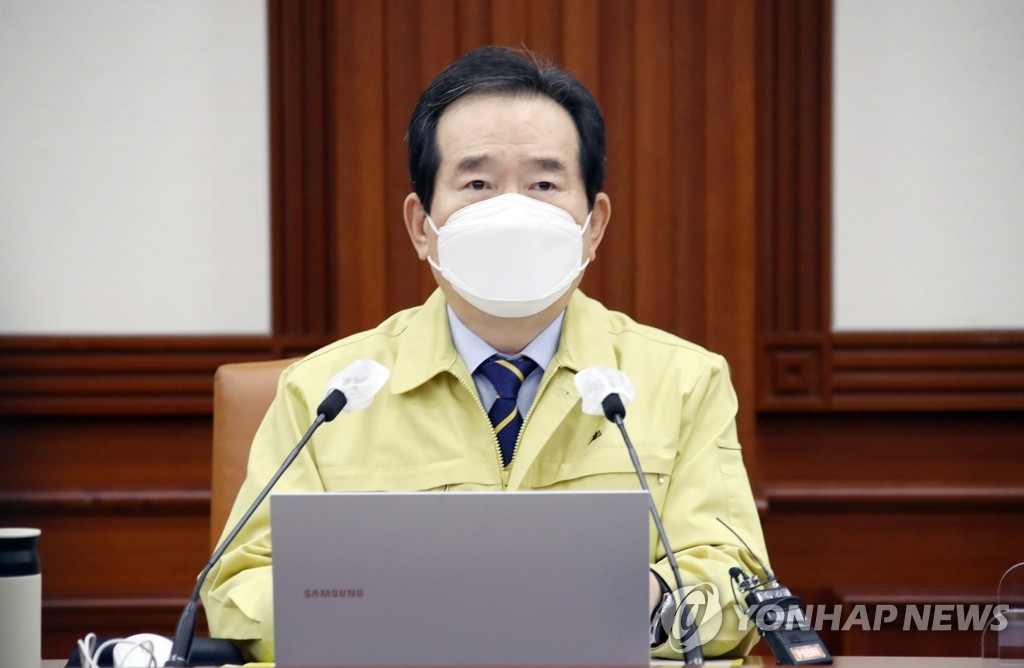