SEOUL, Dec. 28 (Yonhap) -- South Korea's health authorities on Monday confirmed the country's first cases of a more transmissible variant from three arrivals from Britain, and decided to extend the suspension of flights from the European nation by one more week.

The Korea Disease Control and Prevention Agency (KDCA) said the three members of the South Korean family who came from Britain last week were confirmed to have the new COVID-19 strain.

British analysis suggests the new strain may be up to 70 percent more transmissible than the old variant. The new variant is thought to have first occurred in mid-September in London. 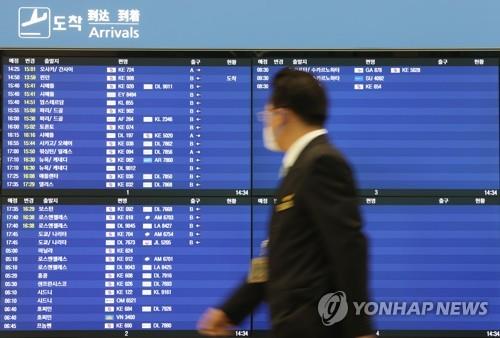 The family lived in London and tested positive for COVID-19 after landing and were immediately quarantined, meaning others in the community had no contacts.

Passengers and crew members of their flight are being retested for possible mutated infections, the authorities said.

The variant has lost part of its genome and a change in the receptor binding domain (RBD) of the spike protein.

Separately, an elderly South Korean man, who recently returned from Britain, has posthumously tested positive for COVID-19, with three of his family members confirmed to have contracted COVID-19.

A thorough investigation is ongoing to look into whether they were also infected with the new variant.

South Korea earlier announced that it will suspend flights arriving from Britain until the end of this year.

On Monday, Seoul announced that the flight ban will be extended by one more week.

"All arrivals, including transfers, from Britain and South Africa will mandatorily submit the negative result of a PCT test," KDCA chief Jeong Eun-kyeong said in a daily briefing Monday.

Also, the authorities will conduct further tests on all foreign arrivals as the new COVID-19 strain has been discovered in other parts of the world.

The country added 808 more COVID-19 cases Monday, staying below 1,000 for the second straight day, according to the KDCA.