The first shipment of the Moderna COVID-19 vaccine for USFK members arrived in South Korea last week, and the command began administering its initial doses to front-line health care workers, first responders and its command team.

Korean nationals affiliated with USFK, including members of the Korean Augmentation to the U.S. Army, known as KATUSA, are also eligible for the campaign, and Seoul's defense ministry on Wednesday allowed them to get vaccinations on a voluntary basis.

"USFK confirms that we started inoculating Korean National health care workers and KATUSAs today," the command said in a statement.

It refused to make public their names or images, citing personal privacy.

Exactly how many South Koreans will be subject to the inoculation program was not immediately known.

Currently, there are around 3,000 Army troops working as part of KATUSA at U.S. military installations, and around 40 KATUSA soldiers are working inside the U.S.' Allgood Army Community Hospital inside Camp Humphreys in Pyeongtaek, south of Seoul, where the USFK headquarters are located.

South Korea plans to start its vaccination program in February. 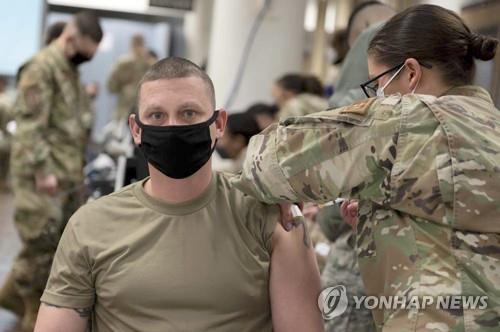