SEOUL, Jan. 3 (Yonhap) -- South Korea's population fell year-on-year for the first time in 2020, census data showed Sunday, with a record low number of births getting surpassed by deaths to cause a natural decrease. 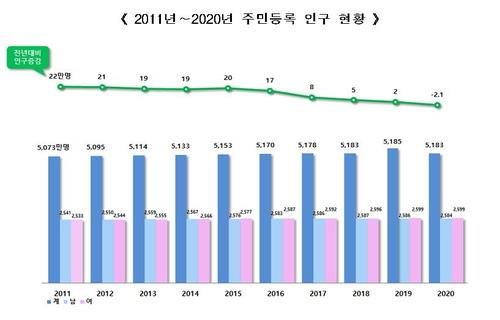 "Amid the rapidly declining birth rate, the government needs to undertake fundamental changes to its relevant policies," the interior ministry noted.

Seoul saw its population drop by a little over 60,000.

Seoul and its surrounding Incheon and Gyeonggi regions accounted for half of the entire population, with 26,038,307, up about 112,000 from the previous year.

By age group, South Korea had the most people in their 50s, with about 8.64 million won, accounting for 16.7 percent of the population.

In an increasingly aging society, the 60-and-over population made up 24 percent of the country.

That is largely attributed to the rise in single-person households. The data showed there were just over 9.06 million households with one person, up by about 574,000 from 2019. Single-member households accounted for 39.2 percent of all families in 2020, more than any other type of households.
(END)